UFI welcomes Author W.H. Doyle. Thanks for Joining us!!

Oh, I wish I had something truly exotic to share. Reading over my bio now I see that I left my husband out of it…so I guess many people wouldn’t know that I’ve been in a relationship for 25 years. Which is wild especially because the way we started out: He walked up to me on the street and stopped me. We had no friends, or much else, in common and somehow our differences just kind of filled in the gaps we both had.

I love the gym. I’m kind of a gym rat. There, I said it. I love getting sweaty and feeling the sore the next day. My livelihood depends on me sitting on my butt nearly all day, so any chance I have to get up and get my blood going, I’ll take.

That moment when you don’t even realize you’re writing anymore. All the strain and all the effort have faded away and you’re just in the flow.

I think routines are luxuries that I can’t really afford. This past year, I sold a place in New Hampshire, moved from New York City to San Francisco—and then back, had a couple family members pass away, nursed my husband back to health after he had a fourteen hour back surgery—and I still managed to write three books. I grab moments and chunks of time to write wherever I can get them!


How would you pitch Tudor Rose to someone who has not heard of it before?

In the late 1500s, three powerful young women vie for the attention of Elizabeth I as they battle each other to win the Queen’s Challenge—who can produce the kingdom’s most spectacular gala.


Can you tell us a little bit about the world that Tudor Rose is set in?

The court of Queen Elizabeth I as seen through the eyes of three incredible teenaged girls.


Do you have a favorite scene in Tudor Rose?

Hell yes, I do. It’s when two of the girls arrive from their dreary country village to the glorious riches of palace life—so relieved and excited!—only to discover that they have just entered a den of vipers.

Is it fair if I give the same answer to both questions? I have a six-book historical fiction series that spans about 90 years, and one of the main characters is in every book. While she was the hardest to write about because I had to research all the things she would be eating, wearing, seeing and doing at various times—she was also the easiest because all that research created a kind of scaffolding that allowed me to focus on her more interesting character traits as she evolved over the decades.

Growing up in Michigan, W. H. Doyle raced past the usual chapter books and went straight to reading YA. His writing career, however, took the opposite path. For over two decades, Doyle’s been writing best-selling books for younger readers with major publishers under the name Bill Doyle. Now, with over two million books in print, he’s making his YA debut as W. H. Doyle with the intrigue-filled Tudor Rose.

While working toward his MFA in Dramatic Writing from NYU’s Tisch School of the Arts, Doyle was taught by the likes of Arthur Miller and David Mamet. He’s written for Rolling Stone, edited several magazines, created interactive experiences for the Metropolitan Museum of Art, and developed critically-acclaimed digital storybooks. He lives on Manhattan’s Upper West Side. 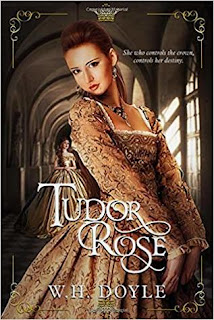 
In 16th-century England, two teenage best friends find themselves on an exciting journey from the country to the Queen’s court in the hope of being named ladies-in-waiting. But Sybille and Rose soon discover they aren’t the only girls who have their sights set on attending Her Majesty. The girls must compete against worldly and cunning opponents, among them mean-girl Avis and her entourage of back-stabbing co-horts, tipping the balance in their already-tenuous friendship.

Soon, the grand hall is more like the hallway of a prestigious finishing school, with girls fighting for the attention of a dashing, young earl, amid parties fueled by drinking and indiscriminate relations. As the tension between Sybille and Avis heats up, the focus on Rose wanes, allowing her to turn her attention to more important matters – like getting close enough to the Queen to learn her secrets.

But being close to the Queen is not without its challenges. And when rumors of Rose’s influence make their way around the castle, no one, not even the Queen, will be safe.


They were gorgeous, even as they sneered and giggled and pointed at Rose and Sybille. Unblemished faces, perfectly coiffed hair, and the most fashionable clothes. The men had trimmed goatees, starched linen ruffs, and wide shoulders that tapered sexily to narrow hips. The women’s painted eyes and lips were framed by long hair banded by strips of jewels. Their gowns—so different than the old-fashioned ones of Gordonsrod—had low, square-cut necklines and a framework that pushed out the dress around the buttocks, emphasizing their figures.

It was everything that Sybille had always wanted. But not like this. Humiliation drove into her like a punch as the stuff of her dreams reconfigured into her worst nightmare.