UFI welcomes Karen Greco Author of Hell's Belle. Thanks for Joining us!!


Blast from the past: A Re-Read of Castle of Terror


I recently revisited a"cultural" milestones from my youth that inspired my predilection for the urban fantasy/horror genre. That would be Castle of Terror by Caroline Farr, a Signet paperback published in 1975.


Our heroine is Megan, a captivating young woman around the age of 19 or 20, who was thrust into the work-a-day world by the untimely death of her parents. A secretary for a high end thoroughbred breeder in Maryland, she lives on the farm with the kindly older man and his younger, hot-to-trot wife. The wife flirts with the clients shamelessly, but that's okay because said clients spend an obscene of money buying their horses. What's a little harmless flirting.


Well, the flirting was harmless until a mysterious Count (from Sicily!) wants to purchase some horses. Clearly infatuated with the wife, he invites the lot of them--horse breeder, hot wife, secretary Megan, and the breeder's two best clients--to the castle (!!) he owns in Maine.


On her way to Maine, Megan runs into the breeder man's hottie Columbia Med School student nephew, who is meeting them for the long weekend as well. They kind-of-maybe flirt on the plane, but she's just not that into him.


The Count, who has recreated his Sicilian village in this small town in Maine, is an collector of medieval torture devises, and he has a whole dungeon set up in the basement of his drafty castle. There was also a gallows set up on a remote island owned by the Count, where one of the rivals for the wife's attention is struck down when it collapsed. Ultimately, Megan sees creepy things happening (real people getting tortured on the Medieval racks), and everyone thinks she's "hysterical."


Now, I have no idea why this was in my mother's book shelf, but I devoured it.


My mom was a literary snob. She shoved books like The Collected Works of Emily Dickinson in my hands. And while I read my first play (Strindberg's Miss Julie) at the age of 10 (and it influenced me enough to pursue theater from that point), I wasn't a big "reader." I would sneak off to Walden Books (remember those?) to read Sweet Valley High, a pre-teen series considered contraband in my home. And then one day I rooted out this Gothic romance from my mother's own bookshelf.


I remember being scared to death when I read this book as a kid. I am not sure if it was fear of my mom catching me or from the book itself.


That said, this book did not age well. More Gothic than romance (there is zero steam between protagonist Megan and the hot med school nephew, but they do have their happily ever after), the book attempts to titillate with a few "busty Italian" broads getting "willingly ravished," which of course scares the crap out of poor innocent Megan. That's to say, the novel is laugh-out-loud sexist.


Between hottie nephew wanting to take care of "hysterical" Megan, the sex-pot aunt tarting up the place, and a homicidal Count willing to do anything to force the object of his affection to love him back, the novel is a literary bucket of soapy suds.


Megan needed the hot nephew to "save the day." And in true romantic lead fashion, he did, and they lived happily ever after. Infuriating, but satisfying.

An award-winning playwright, Karen Greco has spent close to twenty years in New York City, working in publicity and marketing for the entertainment industry.

A life-long obsession with exorcists and Dracula drew her to urban fantasy, where she can decapitate characters with impunity. HELL'S BELLE is her first novel. 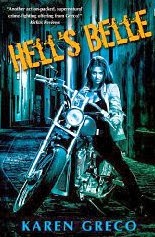 Half-vampire, half-human, Nina Martinez spent most of her life underground as part of an elite secret team of government agents who quietly take down rogue monsters, the human world none the wiser. She moves back to her hometown of Providence, RI to keep an eye on the recent uptick in supernatural activity, and to help run the bar she co-owns with her aunt.

Her attempt at a “regular” life, not to mention a budding relationship with smoking hot FBI agent Max, is cut short because of a string of ritual murders targeting the city's community of witches.

But Nina's investigation unearths deadly secrets from her long buried parents. Now the target of supernatural assassins, could Nina be the most dangerous vampire hybrid to ever exist? No wonder she can’t get a date.