Let us know what you think of the cover for Unraveled (Perfected, #3) by Kate Jarvik Birch, which releases April 3, 2018!

Ella isn’t anyone’s pet anymore, but she’s certainly not free. After exposing the dark secrets about NuPet’s breeding program, forcing them to repeal the law that allowed genetically modified girls to be kept as pets, she thought girls like her would finally be free. She never dreamed that it would backfire. NuPet may have convinced the public of their intentions to assimilate pets back into society, but Ella knows it’s a lie. They aren’t planning mass rehabilitation...they’re planning a mass extermination. Now, with the help of a small group of rebels, Ella and Penn, the boy she’d give up her life for, set out to bring down NuPet for good. But when her group gets implicated in a string of bombings, no one is safe. If she can’t untangle the web of blackmail and lies that extends far beyond NuPet’s reach, she won’t just lose her chance at freedom, she’ll lose everyone she loves.

About Kate Jarvik Birch:
Kate Jarvik Birch is a visual artist, author, playwright, daydreamer, and professional procrastinator. As a child, she wanted to grow up to be either a unicorn or mermaid. Luckily, being a writer turned out to be just as magical. Her essays and short stories have been published in literary journals, including: Indiana Review and Saint Ann’s Review. She lives in Salt Lake City, Utah with her husband and three kids. 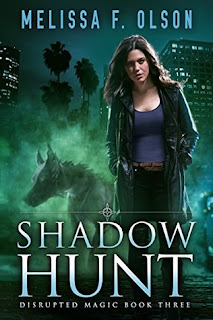 For years now, Scarlett Bernard has counted on two things: her ability to nullify magic, and Shadow, the bargest who guards Scarlett with her life. But after a sudden revelation turns Scarlett’s world upside down, she panics and leaves town without warning, leaving Shadow with her partner, Jesse. In the chaos that follows, the bargest is stolen—and Jesse nearly dies from a brutal psychic assault.

It seems that an old enemy has returned for revenge…and the attack on Shadow was only the beginning. As Scarlett races home to find the bargest and rescue her friends, she is dragged deeper into a terrifying legend that has somehow found its way to present-day Los Angeles.

Now she will have to recruit every possible ally for a battle that will test her null ability to the limit. Scarlett has been in over her head before, but now she risks losing everything—and she’s never had more to lose.


I just can't seem to get enough of Scarlett and her friends.

A lot happens in SHADOW HUNT to wrap up the storyline that has been building in the past two books. If you have not read book two, BLOOD GAMBLE, do not continue to read my review as there will be spoilers for that book included.

As we know from the ending of BLOOD GAMBLE, Scarlett brought a little something home with her from Vegas. SHADOW HUNT sends her on the hunt for answers about what the future will hold for her child. I loved watching Scarlett and Lex work together and it was neat seeing their worlds collide.

I think those that have been frustrated with Scarlett and her choice of love interests in the past will be happy with the developments of SHADOW HUNT. Scarlett ends up with who I have always wanted her to be with and they're finally on the same page at the same time.

The pace in SHADOW HUNT follows the same flow that we have always enjoyed from Melissa Olson. I was very happy with how things turned out with Scarlett and hope that we get to see more of her in the future of this world.