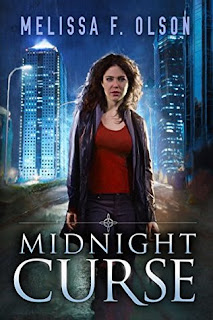 
Scarlett Bernard is used to cleaning up messes. As a human who cancels out any magic around her, Scarlett’s job is to keep the supernatural world hidden—at any cost.

On the eve of the Vampire Trials, a two-day tribunal that allows the otherworldly community to air their grievances, Scarlett receives a blood-soaked message from Molly, her estranged former roommate. Molly, a vampire, had been living with twelve human college students…and in one terrible night, she slaughtered them all.

Scarlett believes Molly’s been set up, but no one else in the Old World agrees with her. And the true perpetrator is determined to make sure Molly goes on trial for the massacre—the penalty for which is death.

With less than two days to prove her friend’s innocence, Scarlett calls on former LAPD detective Jesse Cruz to help her dig into Molly’s past. But no one—Molly included—wants Scarlett and Jesse to bring the terrible truth to light.

I don't know if I'm the only one, but I was so confused when I read the blurb for Olson's new Disrupted Magic series. The main heroine, Scarlett Bernard, already has a series, but now she's the voice in MIDNIGHT CURSE, book one, of the Disrupted Magic series? It felt more like it should be Scarlett Bernard #4.  You can read this series without reading the 3 books in the Scarlett Bernard series, but why would you want to? There is so much backstory, you won't know you're missing, but it makes the book so much better. While you are at it, you might as well read the Boundary Magic series before diving into MIDNIGHT CURSE too. Both worlds intersect and the characters have history.

I was so excited dive back into Scarlett's world. MIDNIGHT CURSE takes place 3 years after the end of HUNTERS TRAIL and it was crazy to see how much the characters have changed. Scarlett is living with her werewolf boyfriend, her ex-vampire roommate isn't in her life and is in fact living as a coed—although not anymore as we soon find out—, and Jesse—the man I wanted Scarlett to end up with—got married, and divorced, has even written a book, and is now a depressed shadow of his bad-ass self. There are more characters, but these three have always been my favorites.

I don't want to get into the plot, but MIDNIGHT CURSE is a fast paced, easy flowing story with lot's of mystery, action and suspense. Characters and their relationships are tested quite a bit, some in more ways than others and getting to see Lex, from the Boundary Magic series, was an added bonus.

The ending kind of throws things on it's head again after a book that works to smooth things out, but it did it's job of getting me to want to read more. Book two, BLOOD GAMBLE, has a release date of July 25, 2017, so at least we don't have to wait to long to find out what happens next.