UFI welcomes Author L.D. Rose. Thanks for Joining us!!

Thank you so much for featuring me on your blog! My name is LInda (writing as L.D. Rose) and I'm a doctor by day and author of dark PNR/UF by night. Since I'm a big fan of everything dark, sexy, and creepy. I figured I'd share my top 10 reasons why I love the paranormal. ;)

On this here blog will be part one, and part two will be at another stop later on this crazy tour. :D

Yep. That’s right. I went to an all-girls Catholic school for kindergarten and first grade (my mother yanked me out before second grade for acting out—oops!). My classmates already thought I was weird since I spoke broken English (my first language was Portuguese and I didn’t go to preschool; I learned English from Sesame Street!). All of us kids were playing a game of tag at recess and I tripped on a rock and sliced my finger open. I immediately put my hand in my mouth to suck the blood away (c’mon, didn’t you do that when you were a kid?!). The girls freaked out and ran away from me, screaming “vampire.” I guess it didn’t help that I had a widow’s peak, dark hair and pale skin. I had no idea what a vampire was, but my feelings were hurt and I cried.

This was obviously quite traumatic since the concept of a vampire invaded my brain and I became obsessed with learning (and writing) about them!

Yep, that’s right too! My family was poor growing up and we bounced from apartment to apartment when I was a toddler. My parents bought a house when I was about five, both of them incredibly excited to have a home.

Too bad it was haunted, haha!

My parents’ little Cape was over a hundred years old and two ghosts apparently haunted the premises (an eight year old boy and an elderly woman who died in the upstairs bathroom; later, my deceased German Shepard made a few ghostly appearances too). I never actually saw them, but their roaming footsteps, cold patches, whispers, and little games such as dropping the blinds, turning off the radio, and the occasional “push” made their presences unmistakably clear.  I have no doubt there’s a ghostly world among us, no matter how much my logical doctor brain wants to argue it.

Do you believe in ghosts?

Thanks to my vampire accusation, I began to read horror stories—a lot of them! My favorite books as a kid were the SCARY STORIES TO TELL IN THE DARK series by Alvin Schwartz. I couldn’t stop staring at the creepy images and rereading the melodious yet disturbing passages. I used to sing THE HEARSE SONG constantly while jumping rope outside like a freaky little kid (THE HEARSE SONG also makes an appearance in BLACK BULLET ;)). As I grew older, I transitioned to R.L. Stine, Clive Barker, and Stephen King, then it was all downhill from there.

See, kids? Be careful what you call your classmates!

Do you have a favorite scary story?

Gremlins. Ghostbusters. Poltergeist. The Exorcist. Friday the 13th. Nightmare on Elm Street. Halloween. Jaws. The Shining. Silence of the Lambs. CLASSICS! Although the horror movie industry has sorely disappointed me as an adult (although THE CONJURING movies were actually pretty good!), these were my most memorable films. My parents would let me watch a few of the more “benign” ones, but I usually snuck out of my room in the middle of the night (or hit the theaters) to watch the more graphic movies.

Surprise, surprise! I’ve been writing for as long as I remember. The first actual “story” I wrote was on a typewriter at ten years old. It was called "The Secret Door", about fifteen pages long, and starred a haunted house that held a portal to another dimension. My first ever publication is a short story in an anthology called “Horrors of History” (Fey Publishing) and it’s about two depression-era gangsters who get more than they bargained for during a bank heist (two words: zombie cops). Now, you can download the story for free if you sign up for my newsletter (I know...shameless plug, I’ll stop)! I plan to do a lot more with these two fellas in the future, since I loved writing them so much. Every story I’ve written has a preternatural edge to it—I just can’t help it, it’s part of who I am.

L.D. Rose is a neurotic physician by day, crazed writer by night, and all around wannabe superhero. She writes paranormal romance and urban fantasy, but she's been known to delve into horror, sci-fi, and medical suspense on occasion. L.D. Rose is a PAN member of the RWA, FF&P, NEC-RWA and CoLoNY. She currently lives in Rhode Island with her studly hubby, her hyperactive boxer, and her two devious cats.

Sign up for her newsletter for the latest on the Senary, sneak peeks, giveaways, and other fun stuff: http://eepurl.com/bKvuXD  You'll receive a free horror short story with sign-up! 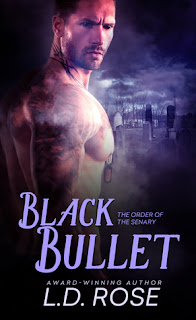 Black Bullet
The Order of the Senary #2
Amazon Goodreads

Not even his past life as a former Marine and FBI agent could prepare him for the battle against the monster inside him, struggling to take hold. After an old nemesis of the Senary surfaces in Brooklyn, unleashing chaos and terror in the battered borough, Jon sets out to take him down. Instead, he ends up with far more than he bargained for when he clashes with the beautiful half-vampire hybrid, Lawan Knight.

After escaping near death and suffering unspeakable horror at the hands of vampires, Lawan trusts no one, regardless of species. In between bouts of drunken stupor, her only goal is to exterminate all those who've wronged her, including every member of Jon's vampire bloodline. But Jon's soulful eyes and quick smile crawls under her skin, transforming her black and white world into a hazy shade of gray.

As the days rapidly grow darker, Jon and Lawan turn to one another, but their inner demons threaten to tear them apart. The only way either of them will survive is if they overcome their greatest fear--Love.