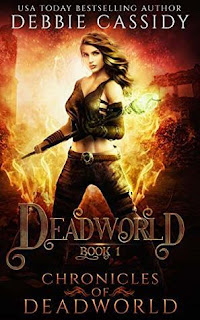 Being a Potential is an honor. It qualifies me for the mandatory Run, the chance to become a Guardian and wield one of the only weapons that can disable a Genesis scout. It also means I’ll have to leave the safety of my underground home and go topside, where the possibility of death goes up by eighty percent.

Badges of honor mean nothing if you’re dead.

I’d rather steer clear of any place where soul sucking AI roam. I’d rather stay safe in the Hive and hangout with my wolf-shifter co-worker. I’d rather work on the mechanical heart that keeps the Hive running and spend time with my enigmatic nephilim mentor. Heck, I’d rather be doing anything else. But I’ve made a promise to my best friend, a promise to get her to the finish line in time to win a spot as Guardian. How hard can it be, right? We have a plan. So why do I feel as if something is about to go seriously wrong?

You don’t have to read the previous series, but man, if you do the thrill ride will be unlike any other.

I enjoyed both the previous series in this world, but I must say I am liking Deadworld a tad bit more after reading just the first book. Now, you don't have to read the past series to jump into this one. You won't be confused or feel lost, but there are some name drops and it's nice to have the history behind the world and some of the characters that are introduced.

DEADWORLD was pretty character driven so I will take a moment to talk about them. Echo is our main character and she is easy to like. She doesn't like what fate has in store for her, but goes along with it anyways and ends up being a pretty big deal in the end. I wish there would have been a little more focus on her siblings and her role as their caregiver as they are a pretty huge part of her life. Maybe they will be more featured in the future.

From what we know about the men so far, I am happy with all of them. They are all likable and mesh well with our heroine. Don't expect much romance in DEADWORLD—or maybe even book two—as Debbie REALLY takes joy in the agony a slow-burn romance brings her readers.

The world was very interesting. We get to see both the new world the author brings us with the underground portion of the story and the future of a world we already know, but have to relearn on the surface.

There's still a lot of mystery about the main character and the world after finishing DEADWORLD. DEAD CITY is due out at the end of May and I already have it on my wishlist.