UFI welcomes Author Zoe Archer. Thanks for Joining us!!

One of my favorite parts of adventure stories came from the inevitable puzzle solving our hero and heroine had to do.  They needed to figure out the ancient code to unlock the vault.  Or figure out what stones they could step on across the huge bridge to make it safely across.  I loved the combination of using brains and daring to solve a problem.  And at the end, they reached the treasure.  Of course, once they got the treasure, getting back to safety was rarely an easy prospect—plus the bad guys were getting closer, so time was of the essence.

Remember that awesome sequence in Raiders of the Lost Ark, when Indiana Jones carefully switches out the golden idol for a weighted bag of stones?  Unfortunately for Indy, his calculations are off, so all the ancient security devices wind up getting triggered, including poisoned spears and that famous giant boulder.  Fortunately, Indy gets out safely.  Unfortunately, his nemesis Belloq is there to steal the idol from him.  But then Indy uses his problem-solving later when it comes to locating the Ark.

I wanted to capture that adventure/puzzle fun when writing SKIES OF STEEL.  In addition to all the other adventures they have over the course of the story, the hero, Captain Mikhail Mikhailovich Denisov, and heroine, Professor Daphne Carlisle, are required to break into an Arabian vault to steal a valuable object.  Since SKIES OF STEEL is a steampunk romance, it was extremely fun to come up with different obstacles and puzzles for Daphne and Mikhail to encounter and solve.  I don’t want to give away any spoilers, but suffice it to say that it takes both brains and brawn to get through the vault and back to safety.  Plus, I have to give a lot of credit to my Ether Chronicles co-creator, my husband Nico Rosso, for creating the amazing steampunk security devices in the vault.

The trick became how both Mikhail and Daphne could work together to solve the puzzles and get through in one piece, because if there’s one thing I hate, it’s when the hero figures everything out and the heroine is just useless or terrified.  So both Daphne and Mikhail lend their different expertise to reaching that valuable object.  And so they do, which helps show that the jaded mercenary and the academic lady are not as dissimilar as they first think.

Zoë Archer is an award-winning romance author who thinks there's nothing sexier than a man in tall boots and a waistcoat. As a child, she never dreamed about being the rescued princess, but wanted to kick butt right beside the hero. She now applies her master's degrees in Literature and Fiction to creating butt-kicking heroines and heroes in tall boots. She is the author of the acclaimed BLADES OF THE ROSE series and the paranormal historical romance series, THE HELLRAISERS. She and her husband, fellow romance author Nico Rosso, created the steampunk world of THE ETHER CHRONICLES together.  Her steampunk romance, SKIES OF STEEL, is now available from Avon Impulse, and Nico’s steampunk Western, NIGHT OF FIRE, is also available now. Zoë and Nico live in Los Angeles. 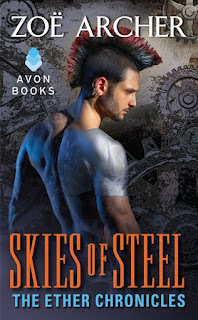 Skies of Steel
The Ether Chronicles #3


In the world of The Ether Chronicles, the Mechanical War rages on, and appearances are almost always deceiving . . .

Daphne Carlisle may be a scholar, but she's far more comfortable out in the field than lost in a stack of books. Still, when her parents are kidnapped by a notorious warlord, she knows she'll need more than quick thinking if she is to reach them in time. Daphne's only hope for getting across enemy territory is an airship powered and navigated by Mikhail Denisov, a rogue Man O' War who is as seductive as he is untrustworthy.

Mikhail will do anything for the right price, and he's certain he has this mission—and Daphne—figured out: a simple job and a beautiful but sheltered Englishwoman. But as they traverse the skies above the Mediterranean and Arabia, Mikhail learns the fight ahead is anything but simple, and his lovely passenger is not entirely what she seems. The only thing Mikhail is certain of is their shared desire—both unexpected and dangerous.