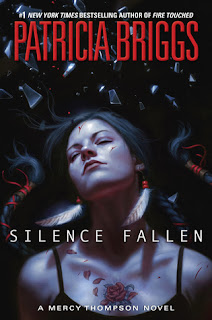 
In the #1 New York Times bestselling Mercy Thompson novels, the coyote shapeshifter has found her voice in the werewolf pack. But when Mercy's bond with the pack and her mate is broken, she'll learn what it truly means to be alone...

Attacked and abducted in her home territory, Mercy finds herself in the clutches of the most powerful vampire in the world, taken as a weapon to use against alpha werewolf Adam and the ruler of the Tri-Cities vampires. In coyote form, Mercy escapes only to find herself without money, without clothing, and alone in the heart of Europe...

Unable to contact Adam and the rest of the pack, Mercy has allies to find and enemies to fight, and she needs to figure out which is which. Ancient powers stir, and Mercy must be her agile best to avoid causing a war between vampires and werewolves, and between werewolves and werewolves. And in the heart of the ancient city of Prague, old ghosts rise...


SILENCE FALLEN had a different feel to me than the other books in the Mercy Thompson series. For most of the book, Mercy is on her own as she escapes her kidnapper and navigates a country she doesn't know on the path to safety.  It started off really slow, but did pick up speed and explored some of the little known about abilities that Mercy possesses.

I was constantly left in suspense and the twists and turns thrown into SILENCE FALLEN were spectacular. The allies that come along for the ride to save Mercy couldn't have been better picked and I enjoyed reading from Adam's POV throughout the story—although I like the couple much better when they aren't apart.

We have been through TEN Mercy books so far, I hope we get many many more. I enjoyed the different environment that SILENCE FALLEN brought to the table, but I really do look forward to seeing Mercy back on her home turf again and among her pack.