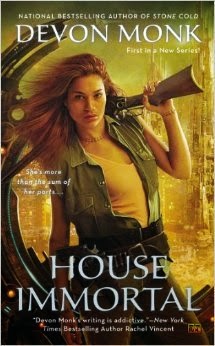 
One hundred years ago, eleven powerful ruling Houses consolidated all of the world’s resources and authority into their own grasping hands. Only one power wasn’t placed under the command of a single House: the control over the immortal galvanized....

Matilda Case isn’t like most folk. In fact, she’s unique in the world, the crowning achievement of her father’s experiments, a girl pieced together from bits. Or so she believes, until Abraham Seventh shows up at her door, stitched with life thread just like her and insisting that enemies are coming to kill them all.

Tilly is one of thirteen incredible creations known as the galvanized, stitched together beings immortal and unfathomably strong. For a century, each House has fought for control over the galvanized. Now the Houses are also tangled in a deadly struggle for dominion over death—and Tilly and her kind hold the key to unlocking eternity

The secrets that Tilly must fight to protect are hidden within the very seams of her being. And to get the secrets, her enemies are willing to tear her apart piece by piece.…

Matilda (aka Tilly), is a pretty awesome heroine. She knows her way around protecting herself, and has no problem telling people what she thinks. I liked that she accepts herself. She was born a normal human but circumstances have changed her into something that shouldn't be possible. When she is discovered, she of course protects herself and is apprehensive about those that want to use her, but she also steps up to her new role while also trying to protect those she is loyal to. I never liked the Neds, they just rubbed me wrong, but I instantly liked Abraham Seventh. I was a little bummed that the romance between him and Tilly never really developed. Their attraction was apparent and there was some mutual relationship type things, but their relationship didn't go anywhere.

There is a ton of mystery involved with this story. Mystery surrounding Matilda, her parents, her brother, the stitched, the Houses. Lots and lots of questions and slow answers that kept you gripped in the story, wanting more. I enjoyed the twists and turns that the author threw out and the world building was well done. I think HOUSE IMMORTAL had more of a science-fiction with a hint of dystopian feel to it and I really didn't want it to be over. The book ends during a pretty hectic part of the book, so you can't help but want more and fast. March is too far away ...