Guest Blog + Giveaway: The Good Girl's Guide to Being a Demon by April Aasheim

UFI welcomes Author April Aasheim. Thanks for Joining us!!


One of the most-asked questions I get is: Why do you write about the paranormal?
In all honesty, I never intended to be a paranormal writer. In fact, I thought I’d end writing humor or women’s fiction.
I remember that day that all changed. I had been contemplating writing a story about a woman with a hoarding disorder. Her home was going to be condemned unless she could make it livable again. But how? Were some magic mice going to come in and clean it up for her?
Since this wasn’t a supernatural tale, the job of the mice fell to her four grown daughters instead.
It was a good concept. A returning home tale where mothers and daughters and sisters hashed out their old problems while sorting through years of collected junk and discovering themselves. I could see it appearing on Lifetime TV. In fact, maybe I already had.
A good concept, but done a few times in a few ways.
Now I was stuck again at square one. Still, I wanted to write something. So I closed my eyes and let my mind wander and when I opened them my fingers began typing. And this strange sentence appeared.  “If I were a real witch, the kind you read about in stories and fairy tales, I might have put a curse on Leah for walking in on me and Michael like she did.”
I stared at the sentence. Who said that? Was it me?
I kept typing. “Not a big curse, of course. Just a little something to teach her how to knock.”
Okay, so that got creepy. These sentences were not in my head. They just kinda…came out.
And then, in another strange moment, I knew these lines had something to do with the story that had already been in my head. It was my mother/daughter story, but different.
I began brainstorming: What if the mother was sick and the daughters had to come home to care for her - except the mother’s illness was ‘supernatural’ and the girls had all been raised up to be witches.
And what if the girls didn’t want to be witches and had left the town long ago to rebel?
There we go. Mother and daughter problems with a visit to the past, too.
And the words kept coming, without outline or plot. They just poured out. And through the course of the story I became the spirited witch Maggie Maddock in my book The Witches of Dark Root. And I fell in love. Not just with the town and the characters, but in the process.
The whole thing was…magical.
So you can say paranormal writing found me, in a Rod Sterling kind of way. And it continues to ‘find me’ as I write other books like The Good Girl’s Guide to Being a Demon and next year’s Nymph No More.
Will all of my stories have a paranormal element? I don’t know. But I’m open to whatever comes through. 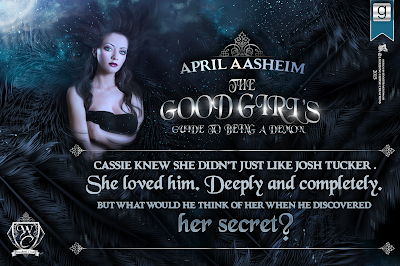 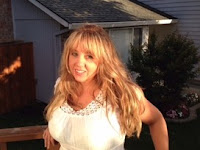 April Aasheim spent her childhood traveling around the Southwestern portion of the United States with her gypsy mother and her get-rich-quick stepfather. During those years she spent time traveling with the carnival, living in an abandoned miner's shack, and learning to read Tarot Cards. After spending her early adult years in California, Tennessee, and Arizona, she finally settled down in Oregon where she has lived for the last decade. April is a mother, a wife, and a reluctant homemaker. She has written several short stories and maintains an active blog. She is also the author of the witchy, Amazon Best-Selling fantasy series: The Daughters of Dark Root. 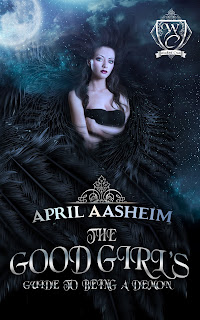 The Good Girl's Guide to Being a Demon
Amazon

Fearful, she returns to her childhood home to solve the mystery of what she’s becoming. There, she meets up with childhood friend, Josh Tucker, who convinces her to enter the annual Demon Run in Woodland Creek.

But things aren’t always what they seem in Woodland Creek, and people aren’t who they appear to be.

Soon, Cassie finds not only herself in danger, but Josh as well.

Can she save them both? Or has her lineage tainted her forever?


The Woodland Creek Series is an innovative and collaborative collection of Shifter stories set in one town, each with a guaranteed Happily Ever After.