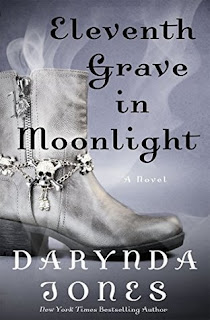 
A typical day in the life of Charley Davidson involves cheating husbands, missing people, errant wives, philandering business owners, and oh yeah...demons, hell hounds, evil gods, and dead people. Lots and lots of dead people. As a part time Private Investigator and full-time Grim Reaper, Charley has to balance the good, the bad, the undead, and those who want her dead. In this eleventh installment, Charley is learning to make peace with the fact that she is a goddess with all kinds of power and that her own daughter has been born to save the world from total destruction. But the forces of hell are determined to see Charley banished forever to the darkest corners of another dimension. With the son of Satan himself as her husband and world-rocking lover, maybe Charley can find a way to have her happily ever after after all.


Another Charley Davidson book has hit the shelves and if you are a fan of this series, you'll want your very own copy. If you haven't started this series yet you are missing out!

I don't want to spoil anything for you, so I will only say a few things about the story line. I continue to love the investigating parts of the series. In ELEVENTH GRAVE IN MOONLIGHT the investigating hits close to home on two fronts. Charley dives back into investigating Reyes' kidnappers and she also has to find out who's stalking Amber. As with all the other books in the Charley Davidson series, nothing is what it seems, there is plenty of action and things move at a great pace.

Charley is Charley and I wouldn't want her to be anything but herself. I have watched her grow, fall in love, battle her demons— and some other peoples demons—. I have watched her lose those she loves—and even herself for a small time—as well as gain new allies. It feels like we have been through so much together, but there is more to come and I am so glad I continue to get the chance to witness it.

The relationship between Charley and Reyes continues to frustrate the hell out of me. They have massive chemistry, they love each other to the end of the universe, they both kick massive butt, but they have the worst communication skills in the history of the world. Seriously guys it's not hard, TALK TO EACH OTHER, be honest with each other, it would save so much conflict and frustration.

The ending, oh the ending. It shouldn't be legal for authors to leave readers hanging off a cliff like that. Maybe I should recommend that you wait to pick up book eleven until book twelve is here? THE TROUBLE WITH TWELFTH GRAVE can't get here soon enough for me.