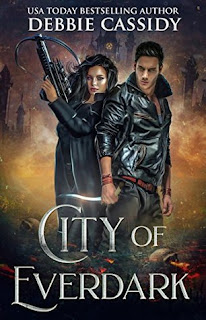 
Fate can't hold all the cards, not if she doesn't have any fingers.

Getting answers means recon and lies, coercion and revelations. It means jumping through several hoops, like infiltrating a maximum-security government quarantine facility to break out the inmates.

Wila will do whatever it takes to get her Kindred and her draconi prince back, even if it means venturing into a place of nightmares, a place of everdark and monsters with not a pot of tea in sight.

The darkness awaits, and Wila better hope it doesn’t swallow her whole.


After finishing book two, all I wanted was answers about Wila and the guy in the basement and by the end of CITY OF EVERDARK we get them.

It can get a tad bit frustrating when things drag on, but CITY OF EVERDARK ends our suffering on a few fronts. Let's start with the guy behind the door in the basement. WOW what a doozy. I don't want to give away any spoilers, but I have to say I'm not totally sure how I feel about the sexual tension between the two, it's a little weird considering who he is to Wila. I will explain more with my review of book four when it comes out. A lot is revealed about Wila's mysterious past. It was kinda weird to get so much info in just a few chapters after so much mystery, but a lot makes sense now and I'm happy to be out of the dark.

I'm still highly frustrated—and I'm sure Wila is too *wink—with the fact that the harem doesn't seem to be settled and complete. There is so much sexual tension and not enough release going on. Who is part of the harem? Will there be another one added in the next chapter? COME ON, I need some answers! This series is much more UF than RH, but I still want some romance!

How can I not want to read the final book after the revelations in CITY OF EVERDARK? Hopefully book four ends this series with a bang.