Review: A Pack of Vows and Tears by Olivia Wildenstein (@OWildWrites) 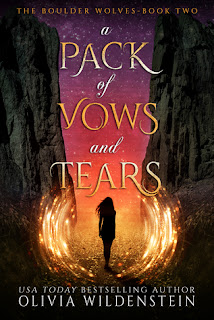 In the seductive follow-up to A PACK OF BLOOD AND LIES, Ness Clark’s heart and legitimacy are again put to the test.

She thought the fight was over but it was only just beginning.

Ness Clark's place amongst the Boulders and at Liam’s side is compromised. First, when her cousin claims Ness helped him elude his death sentence. And then, when August Watt, Ness’s childhood friend, comes home to Boulder.

Although August’s plan was to pledge himself and return to active duty, he finds himself incapable of leaving. This becomes problematic for Liam and Ness, because a mating link has clicked into place between Ness and the ex-marine. If not consumed, the link will fade, but that’ll take months. How long and hard can two people fight a physical attraction that renders their bodies unreceptive to anyone’s but their mates?

Ness is tired of fighting, tired of having to prove herself worthy of her pack’s trust and of her Alpha’s affection. But when an enemy pack arrives and threatens the Boulders, she has two choices: step aside and let the wolves who have pushed her away fend for themselves, or step up and help them fight the newcomers.

Ness has never stepped aside…not for anyone.

Why would she start now?


I have been looking forward to finding out what would happen next for Ness since the ending of A PACK OF BLOOD AND LIES.

I really enjoy the characters of this series. Ness is now a full and true member of her pack. Her growth as a character is developing at a nice pace. Ness' uncle really grew on me in book two. With his wife out of the picture he is like a whole new man—although a sad one at most times.

There is a bit of a love triangle happening in A PACK OF VOWS AND TEARS. Liam has his issues, I like him one moment and despise him the next.I have always liked August. He fits into Ness' life well and I liked the fact that Ness didn't just jump into her feelings for him.

I hated the ending, it felt dirty and I can't believe Ness put herself in that position. Two steps forward and five steps back.  I honestly have no clue what the repercussions of her decision will be, nor do I know how things will play out. Thankfully I still like the story enough to want to find out.