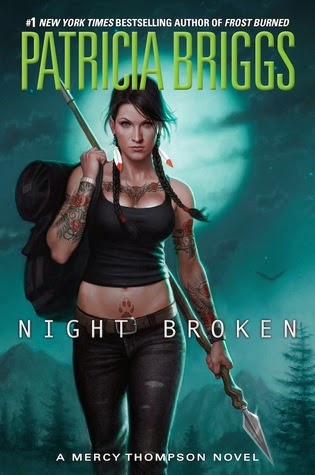 
An unexpected phone call heralds a new challenge for Mercy. Her mate Adam’s ex-wife is in trouble, on the run from her new boyfriend. Adam isn’t the kind of man to turn away a person in need—and Mercy knows it. But with Christy holed up in Adam’s house, Mercy can’t shake the feeling that something about the situation isn’t right.

Soon, her suspicions are confirmed when she learns that Christy has the farthest thing from good intentions. She wants Adam back and she’s willing to do whatever it takes to make it happen, including turning Adam’s pack against Mercy.

Mercy isn’t about to step down without a fight, but there’s a more dangerous threat circling. Christy’s ex is more than a bad man—in fact, he may not be human at all. As the bodies start piling up, Mercy must put her personal troubles aside to face a creature with the power to tear her whole world apart.

When Christy calls freaking out about the danger she is in and seeking help Mercy convinces Adam to let her come. She is anything but happy to have her there but she is Jesse's mother and doesn't want anything to happen to her. Although Christy has gotten herself in trouble Mercy knows there is more to the story and as time goes on it comes clear that she has not been totally honest.

There were quite a bit of emotions brought up in NIGHT BROKEN. Some past emotions are brought up when Mercy is attacked in her garage, she has to watch the pack fall all over Christy and protect her at every turn, she has to watch her husband reminisce with his ex wife all while trying to keep her head up and be the bigger person. She did AMAZING (although the moment at the end of the book where she shows Christy the figurative middle finger ROCKED). She was a far better person than I would have been.

There were plenty of times I wanted to punch some of the pack mates. Christy is seriously a manipulative piece of work but by now I expected a little more from the pack. I know they have not always liked Mercy but her being the Alpha female should have meant more to them. I felt Adam did a wonderful job in NIGHT BROKEN. Adam had a few male brain fart moments but I was pretty happy with how he handled everything. He truly and fully loves Mercy and it showed.

The Mercy Thompson Series quickly became one of my favorite series when I started reading it a few years ago and I fall more in love with it with every installment. Every book seems to start with action and end with a bang. I'm very excited to see what will come next and hope we get a longer book because I just can't get enough.