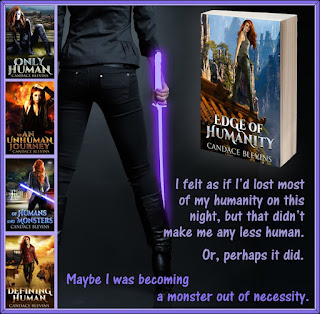 I’m here to celebrate the release of book four in my dark fantasy series, but I feel I should mention it’s a sister series to my urban fantasy series (seen at right). The ONLY HUMAN series takes place in the human realm, while my DARK(ish) FAERIE TALE takes place in… Faerie. The two series share some characters who spend time in both realms.

Queen Mab it also known as The Dark Queen, The Evil Queen, and The Winter Queen. She comes by all of her titles legitimately, and yet we’ve seen glimpses of a human side when she’s shown up in previous books. I wanted to explore this, and ended up exploring so much more.

Readers have compared the ending to Harry Potter and the middle to Anne Rice’s Beauty series. The reader is thrown straight into the dark, kinky, murky waters from the beginning, but we must understand rock bottom before we can climb out.

Because I believe my readers can tell you more of their experience reading than I can of what the book is about, I’ll leave you with some of the things they’ve had to say:

Taken at face value, each book can be a bit intense. Taken as a whole, it’s a really well planned journey of four souls-seeking, and there is a depth and breadth to both their individual and collective experience. –Jaycee

Candace Blevins is the best at storytelling, she took us on quite a journey, the growth of these characters was enlightening. There are consequences for your actions. –Evita

What I liked most about the sex was that it enhanced the story, it didn't become the story. –Kristi

From the very beginning, I think the story was about growth, about evolving. Knowing the risks and still taking that step. Slave, Queen, Lady, Prince, Man, and Woman. Each had their story, their personality to grow into, and they did so beautifully.  –Daria

This whole series has been about the journeys we take in life to become our true selves. –Vickie Brown 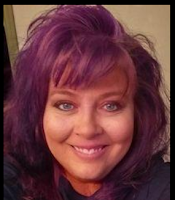 Candace Blevins has published more than thirty-five books. She lives with her husband of twenty years and their two daughters. When not working or driving young teens all over the place, she can be found reading, writing, meditating, or swimming. The family’s beloved, goofy, retired racing greyhound is usually at her side as she writes, quietly keeping her company.

You can visit Candace on the web at candaceblevins.com and feel free to friend her on Facebook at facebook.com/candacesblevins and Goodreads at goodreads.com/CandaceBlevins. You can also join facebook.com/groups/CandacesKinksters to get sneak peeks into what she's writing now, images that inspire her, and the occasional juicy teaser.

Stay up to date on Candace’s newest releases, and get exclusive excerpts by joining her mailing list at http://bit.ly/cb-new-release 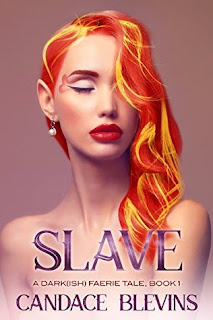 
Because you're never too old for Faerie Tales...

Halflings born in the human realm can stay if they can pass for human, but a baby with bright red and yellow hair, pointed ears, glowing green eyes, and swirled purple and green nails had to be relocated. With no family in Faerie to claim her, the newborn was auctioned off as a slave.

In Faerie, slaves are property with no rights. The baby is now an adult, and has been given in tribute to The Winter Queen.

Queen Mab has worked hard to make everyone in Faerie fear her, but her new pleasure slave enjoys the kiss of her whip. Can the Dark Queen have a tender side? The Dragon King once loved her, after all, so there has to be more to her than the evil, ruthless queen we've seen so far.

Climb aboard and experience the best and worst the Winter Queen can dish out.


Slave is book one in the Dark(ish) Faerie Tale quadrilogy. The series takes place within the greater Kirstin O'Shea universe, but can be read without being familiar with the other books and series.

For every season, there are positives and negatives. Today is the summer solstice, and I’m miserable in the heat. Plus, my sister is Queen of Faerie during the summer.
From here on out, the days will grow shorter, and the time of my reign draws nearer. Come the fall equinox, I’ll be the ruling Queen once more, and my days will be filled with the duties of running the queendom.
However, for the time being, I had the luxury of spending all the time I wanted in my dungeons, and I was fully taking advantage of the long days — there are so many people to torture and play with in the bowels of my castle.
I’d acquired the former Eagle King as a result of a horse trade a while back, and was still having great fun with him, but I’d been informed we had a new pleasure slave — paid to me in tribute by a wealthy businessman — and she’d been put into a holding room so I could personally handle her intake process.
Prisoners are fun to punish, but the rare pleasure slave who’s been trained to enjoy torture is a special treat. I’d seen the paperwork on this girl, and based on her previous owners and trainers, I had hopes she might prove a nice diversion.
I was informed she seemed a nervous wreck, so I went to the holding room instead of having her brought to the throne room. I brought another slave with me, one who’d record the new slave’s answers and any notes I wanted put into the girl’s file.
Contrary to what most probably think of the Wicked Winter Queen, I don’t make a habit of abusing my slaves just because I can. I’d whipped this particular stenographer slave once when she was rude to a business associate, and I’d assigned her to dishwashing duty in the kitchens for a month when she zoned off while on the job, but the girl’s been with me nearly fifteen years and those are the only two times she’s been punished.
My first view of the new little pleasure slave sent tingles through my magic. She was a little slip of a thing and strikingly beautiful. Someone had put her into my preferred inspection pose — feet a little wider than shoulder width, perfect posture, eyes straight ahead, fingers laced at the back of her head. She still held it beautifully, and her arms didn’t appear to be shaking.
Some slaves hold their position when I enter, but most prostrate themselves. Neither choice earns reprimand or punishment at this stage, but I was intrigued she’d chosen to follow orders over protocol.
Whether she’d been naked when she arrived or had been stripped to nothing by my guards, I didn’t know. I wasn’t certain of her most recent owner’s slave protocols for travel, but the Master he purchased her from wouldn’t have permitted clothing at any time, nor would her original owner, where she was raised and trained.
I walked in a circle around her, observing. She didn’t break posture. Didn’t move a millimeter, other than to breathe. Her nails were swirled purple and green, her red hair had streaks of gold, and her eyes practically glowed green. I circled her a few more times, and noted her toenails matched her fingernails. I’d need to double-check to be sure the familial searches had been done.
My new slave had enough muscle I knew she’d be able to handle what I doled out, but was soft enough she’d still be fun to play with. I couldn’t wait to see her flawless white ass with streaks of red from a strap, and then dotted with smaller streaks from a flogger. However, she was too thin for my tastes, and I made a mental note to check later to see if this was her natural size, or whether her food intake had been severely restricted.
“What’s your name?”
A deeper breath, so she’d have enough air to speak, but she answered quickly, her eyes still straight ahead without looking at me. “My original owner called me seven-sixty-three, Ma’am. The Master I just came from called me little one.”
Before I slapped the shit out of the girl for her impertinence, I asked, “Do you know who I am?”
“No, Ma’am?”
Her voice wavered and her arms finally shook a little. The poor thing was scared shitless, and I was about to terrify her even more, whether I wanted to or not. I softened my voice and said, “You address me as my Queen or Your Majesty, Little One.” 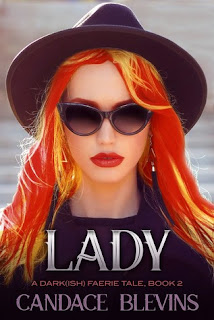 Tabitha has so much to learn about living with a family, and she makes her grandfather and cousins terribly uncomfortable when she doesn’t fit in. She was punished for looking free people in the eyes all her life, so it’s understandable she has trouble learning to maintain eye contact. And making decisions is impossible — from what she wants for breakfast, to when she’s tired enough for bed, and everything in between.

Her grandfather’s horses don’t judge, and working with them finally helps her begin to find a path towards figuring out this new life, where clothes must be worn all day, every day.

Just when she’s resigned herself to this life and is certain she’ll never enjoy sex again, an invitation arrives to attend one of the Winter Queen’s balls — along with a fancy gown that raises more questions than answers.

Lady is book two in the Dark(ish) Faerie Tale quadrilogy, and should be read in the correct order. 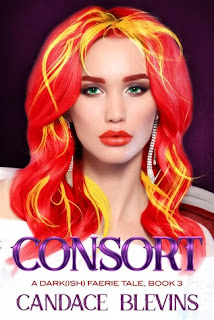 
We don’t get to choose our lives, we only get to live them as they’re handed to us.

Mab wanted Tabby to get comfortable with life at the castle before being stressed with the responsibilities of Consort, but Prince Rowan’s timetable means some decisions must be made sooner rather than later.

Mab’s a rip-the-bandage-off kind of Queen, which means Tabby and Rowan aren’t in for an easy time.

Most people are terrified when they find themselves at the mercy of The Dark Queen.

Consort is book three in the Dark(ish) Faerie Tale quadrilogy, and should be read in the correct order. 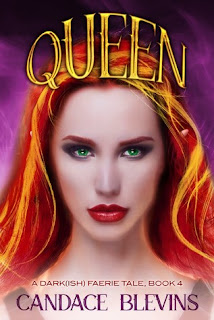 
Life can take some complicated paths to get you where you need to be.

Prince Rowan can’t live in Mab’s castle forever. If he has any chance of holding onto his title and one day being King, he’ll need a wife and heirs, and he’ll have to live in his own castle, in his own demesne.

Mab is finally confident of her place in Tabby’s heart, so she isn’t jealous of the pain and sorrow her little one feels at the loss of Rowan.

Princess Tabitha has been slave, Lady, and Consort. She never wanted more, but sometimes destiny makes your choices for you.

Queen is book four in the Dark(ish) Faerie Tale quadrilogy, and should be read in the correct order. 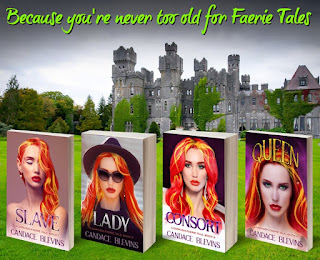