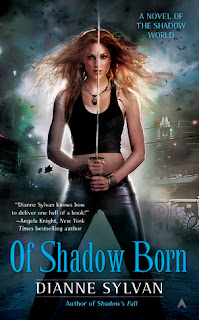 Spread throughout the dark corners of our world lies the Shadow World, a society of vampires who feed off the living. In Austin, Texas, one woman must rise from the ashes of tragedy and confront an ancient evil before it destroys everything she holds dear…

After a heartrending night of loss and blood, Miranda Grey-Solomon, vampire Queen of the South, now stands in the ruins of her life determined to pick up the pieces and move on. David, her husband and Prime, is missing and presumed dead, and Miranda is lost without her soul mate by her side…But she has little time to grieve as enemies both old and new emerge to test her yet again.

Between vampires trying to take advantage of a Queen without a Prime, incursions by a mysterious organization of humans calling themselves the Order of the Morningstar, and the continuing threat from those within the Shadow World who have already tried to destroy her, Miranda and her allies are running out of places to turn. In order to save her territory and the ones she loves, Miranda must look to the ancient past, to the first days of the vampire race, and uncover secrets about the Signets that could change the course of history…


I'm kinda on the fence about this one. I liked it, but there were a few weird parts. It was no stretch to guess that David does not stay dead and that Miranda doesn't die with him. I went into OF SHADOW BORN wondering how long it was going to take to finally show that David was alive and I'm glad to say that it wasn't super long.

I really do love Miranda and David as a couple. A few books ago David really messed up and I honesty wanted to throw up during that time as I was reading but they have grown a lot since then and they have a great relationship with each other as well as Deven and Jonathan . I loved the addition of Stella to the series, she is loyal and sweet and is willing to help in any way that someone lets her. I also thought that the addition of Olivia was interesting and feel that she will continue to be a great ally in the events ahead. The pacing in OF SHADOW BORN was fine but there were a few parts that got a tad boring in the story and could have done without. We definitely need more information on the Goddess storyline and once we get that I think seems will be more clear. Over all Book 4 had nice growth and continuation of the story.

I'm not totally sure where Dianne is bringing everyone but I wont stop reading now. Book 6 is not yet scheduled but I hope we wont have to wait long. I don't think any fan of the series will be disappointed with OF SHADOW BORN.