Early Review + Giveaway: The City of Light by Keri Arthur 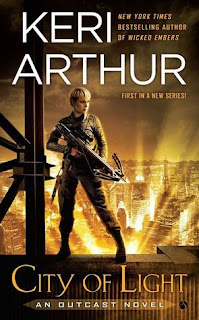 The first in an all-new futuristic fantasy series from Keri Arthur—the New York Times bestselling author of the Souls of Fire novels.

When the bombs that stopped the species war tore holes in the veil between this world and the next, they allowed entry to the Others—demons, wraiths, and death spirits who turned the shadows into their hunting grounds. Now, a hundred years later, humans and shifters alike live in artificially lit cities designed to keep the darkness at bay....

As a déchet—a breed of humanoid super-soldiers almost eradicated by the war—Tiger has spent her life in hiding. But when she risks her life to save a little girl on the outskirts of Central City, she discovers that the child is one of many abducted in broad daylight by a wraith-like being—an impossibility with dangerous implications for everyone on earth.

Because if the light is no longer enough to protect them, nowhere is safe...

What a unique new series by Keri Arthur. No urban fantasy fan should pass it up!

We find out immediately upon reading THE CITY OF LIGHT that the main character, Tiger aka Tig, is a déchet and that she is in hiding. Right after that she saves a little girl —and the hurt shifter with her that she would rather leave for dead—right before the vampires can get their hands on her. That decision changes the quite life she has built for herself and sends her into danger to investigate why children are going missing. Tig as a character really intrigued me. She was bred and programmed to be killer, but she is extremely compassionate and loyal. Every time I thought I knew her, another part of her was revealed.

I usually get overwhelmed when there are a ton of different creatures and characters introduced in one book, but I found that Arthur did a great job with THE CITY OF LIGHT. The world building was easy to follow and the introduction to new things were spread out instead of dumped on the reader at once. Arthur described the world really well in every circumstance and made it easy for me to fall right into it.

THE CITY OF LIGHT is an urban fantasy, but there is some romance involved. On one side there is Jonas. He hates the déchet with a passion, but he's drawn to Tig and totally resents it. There is a ton of sexual chemistry and tension between the two and you can't help wanting Jonas to get over himself and his prejudice so they can start something. I have high hopes for book two. Then there is an old friend who Tig thought was dead that I don't want to go into too much detail about. Neither has an issue acting on their attraction for each other–which is very strong–, but they are both very different from who they were.

THE CITY OF LIGHTS unfortunately ends on a pretty big cliffhanger, which is never fun, but I will definitely be reading more and look forward to WINTER HALO in December 2016.

“Keri Arthur has blown me away again. Her worlds are so complex and ‘real.’….I highly recommend Arthur’s books.”
—USA Today