I love perfectly shaped trees and have an unquenchable thirst for knowledge.

Playing on my tablet. I love tabletop games, but sadly my friends don’t, so I’ve found a few great apps, like Carcassonne and Stone Age, that keep me occupied for hours. Oh yes, I said ‘hours.’

That’s a tough one. Perhaps dialogue. When I prepare my first draft, I’m so lost in the moment, it’s just me watching the characters talk to each other. During the editing stage, I flesh out the scenes with movements, emotions and description, but the dialogue usually stays the same.

Yes. Butt in chair, cup of tea to my right, and phone off.

How would you pitch GUARDED to someone who has not heard of it before?

When everyone’s existence depends on the lies they tell, trust doesn’t come easy. Caught between three men, Ivy must tread carefully, because one wants her heart, one wants her body, and one wants her dead.

Can you tell us a little bit about the world that GUARDED is set in?

A long time ago, humans and kin (werewolves, vampires, demons, fae, satyrs etc.) lived side-by-side, until a few kin began using their powers for evil. A group of demons was charged with restoring order. These ‘Guardians’ carved a separate realm out of the old world and set about shipping the worst of the worst off to the newly created Alethia. Yet many stayed behind, blending in undetected with ordinary humans. This is the environment Ivy has to navigate, except she can tell who is human and who isn’t.

Do you have a favorite scene in GUARDED?

Several. The first time Flo and Parker are in the same room is probably the funniest scene. Their second-grade insults are hilarious. Definitely a get-the-popcorn moment.

One of the main characters in my first book, DIVIDE AND CONQUER, is a total geek, and it was fun letting her loose among people that totally didn’t get her. The hardest character for me was perhaps Ivy in GUARDED. Her change from someone who lacks confidence to someone who is comfortable in her own skin did not come easily, perhaps because I myself have not yet reached total acceptance of who I am.

All things going well, I’ll be putting some anecdotal short ghost stories out in time for Halloween and a short novella in December. I’m currently working on the sequel to GUARDED for release in early 2016. 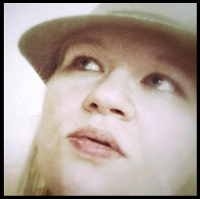 Expect to be kept guessing. 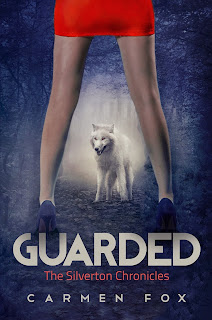 When everyone's existence depends on the lies they tell, trust doesn't come easy.

Ivy’s neighbors have a secret. They aren’t human. But Ivy has a secret, too. She knows. As long as everyone keeps quiet, she’s happy working as a P.I. by day and chillaxing with her BFF Florian, a vampire, by night. When a routine pickup drops her in the middle of a murder, her two worlds collide. While Florian knows how to throw a punch, deep down he's a softie. His idea of scary? Running out of hair product. It’s time Ivy faced facts. Even with a vampire on stand-by, one gal can only kick so many asses.

For help, she must put her faith in others. A human, who might just be the one. A demon, who will, for a price, open the doors to her heritage. And a werewolf, who wants to protect her from herself.

Parker placed both elbows on the table, rested his chin on one hand and regarded me for a moment. “So, Ivy. A P.I., eh?” He smacked his lips. “Don’t take this the wrong way, but you don’t exactly look like Philip Marlowe.”


“Your point being?” I squinted.


“You’re tiny. I mean, I’m sure you can take care of yourself. What if you need to overpower a 200-pound man, though? Do you at least know how to shoot your gun?”


“Shoot?” I scrunched my nose. “Yes. Aim and hit the target? Not so much. The last guy who made fun of my size still walks with a limp.”


“See, you hit one target right.” His eyes glinted.


I lifted my gaze. “I was aiming for his groin.” I squished my cupcake and shook my head. “No, I don’t carry a gun. And believe it or not, my size is an advantage. If you were an unfaithful husband and I followed you to a bar, trust me, I’d go unnoticed among the usual throng of people.”

Parker’s grin turned mischievous. “Well, Veronica Mars, I hate to be the bearer of bad news.” His voice reverberated through my nervous system. “I’d notice you.” He sipped his coffee. “If I was an unfaithful husband, that is.”