UFI welcomes Author Sharon Buchbinder. Thanks for Joining us!!


Royal Watching
He was the reluctant heir to the throne of a desert kingdom.
She was a virgin queen living far away in the south.
A little bird told him of her beauty--he had to meet her.
A travelling merchant told her of his wisdom--she had to meet him.
Something greater than either of them conspired to bring them together. When they met, could there be any doubt they were meant for each other? But would duty to country prevail over their pledge to one another? Only time and love would tell.
Sound like the stuff of romance novels? Yes, this was a romance writ large because it was an affair of state and royalty. And these characters appear in no less than four holy books: the Torah, the Koran, the King James Bible and the Kebra Nagast (The Glory of Kings).
In Biblical times, he who could kill or overcome enemy tribes became king. With lots of children and careful planning, his heirs would succeed him. But not all countries had the same traditions. In some parts of the world, women ruled by might or by right to the throne. For the royals, marrying and having children was an affair of state. Right up until recent times, it was not uncommon for the royalty of different lands to marry for the mutual benefit of their countries. In our modern era, heads of state and heirs to thrones have been granted the freedom to marry whom they choose--within reason.
Millennia before William and Kate’s time on the world stage, people have been royal watchers. Some watched to see if they were in favor and able to gain, others to see if they were out of favor and about to lose--their heads! Still others watched because it was simply the best show in town.  So when the royalty of Israel met the royalty of Sheba, all eyes were upon them. Based on the appearance of these two royals in no less than four world religions, no one could resist watching the wise King Solomon and the beautiful Queen Makeda. The eyes of the world were upon them.
In researching, Kiss of the Virgin Queen, I became a royal watcher--from a distance of over three thousand years.  My historical voyeurism took me down a circuitous path across time and cultures to their mythic romance.  Destinies entwined, some would say the Makeda/Solomon romance was bashert, destiny.
With construction on the first Temple well underway by the time King Solomon greeted the extravagantly generous Queen of Sheba, he already had seven hundred (700) wives and three hundred (300) concubines. By marrying princesses of rival kingdoms, he had built an extraordinary alliance and ensured the safety of the trading routes. Curious about the man behind the legend, Queen Makeda traveled fifteen hundred (1500!) miles from Ethiopia to meet the wisest man on earth--and to ask him “hard questions.” When they met, the Queen was left breathless. The attraction was mutual--but there was nothing they could do about it. Or was there? 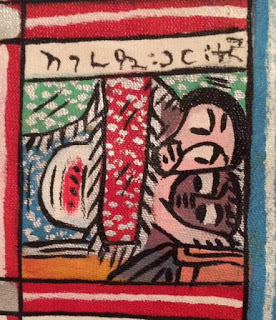 This story, like many other wonderful legends, takes place in the space between religion and the paranormal.  Kiss of the Virgin Queen explores that space and the effects of the epic romance between King Solomon and Queen Makeda that continue to ripple down the centuries to their descendants.
No matter how far we are into the future, everything connects us to our past.
__________________________________

Sharon Buchbinder has been writing fiction since middle school and has the rejection slips to prove it. An RN, she provided health care delivery, became a researcher, association executive, and obtained a PhD in Public Health. When not teaching or writing, she can be found fishing, walking her dogs, or breaking bread and laughing with family and friends in Baltimore, MD and Punta Gorda, FL. 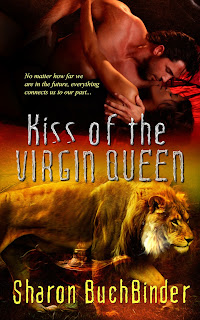 
Homeland Security Special Agent Eliana Solomon is on a mission to prevent terrorist attacks. Hard enough to do when the threats are human, almost impossible when it's an evil, shape shifting jinni. Eliana needs help so she calls the sexy and beguiling psychiatrist, Arta Shahani. However, no matter how good he is at his job, the man is on her blacklist. On their last case together, the guy left her for dead.

Arta is stunned when he receives Eliana’s call. Forced to abandon the woman he loves, he now fears she won’t accept his shape-shifting skills as a Persian Lion. Eliana, in the meantime discovers she is a direct descendant of King Solomon and the Queen of Sheba with special powers of her own. But will her skill and Arta's be enough to defeat the jinni, or will they lose the love history decreed for them as well as their lives in this battle of good versus evil?


A picturesque flight over the Appalachian Mountains to Summertown, West Virginia gave Special Agent Eliana Solomon of the Homeland Security, Science and Technology Directorate, Anomaly Defense Division time to process the urgent report she’d received by email. Up until this week, the existence of werewolf packs had been concealed from the general population. Now reports of the secretive shape shifters exploded in her inbox. Where had this information been all this time? Had the government monitored them all along? If so, why had her boss, Bert Blackfeather, insisted on her obtaining proof of their existence, along with the jinnis? She’d pry an answer out of that closed mouth man—someday. Right now, she had a more pressing matter at hand.


Five days ago, three nine-year-old werewolf boys and their three eighteen-year-old sisters went on a birthday expedition in the heavily wooded state wildlife area and disappeared. By day, local human authorities, volunteers, and bloodhounds brought in from surrounding jurisdictions combed the forest, the hills, and caves. By night, pack members ran through the forest using their extraordinary senses—olfactory, visual, and auditory—to hunt for their missing kin. Divers also explored the waterways, all to no avail. No clues to the kids’ whereabouts had been found, not even a backpack—until two this morning.


A night security guard discovered the boys in the middle of the Adalwolf Winery parking lot. Slightly bruised and scratched up, but otherwise alive and well, in their human forms, the youngsters had no  recollection of anything between arriving at the park and waking up in the parking lot with their back packs under their heads—their five-day-old lunches untouched.


Rushed to the ER and examined thoroughly, the boys displayed no evidence of physical abuse. The blank space in their minds where the memories should have been was inaccessible to parents and psychologists. If it weren’t for the fact that the three older girls were still missing, the local authorities wouldn’t continue to press the boys for information. Over time, their memories could return, but without ransom notes, calls or clues, the clock was running down for a successful search and rescue. The local police, state troopers, sheriff’s office, and the West Virginia Bureau of Investigation feared the operation would soon become a search and recovery.


The plane touched down, bounced along the runway, and Eliana’s cell began to vibrate.


The gruff voice of her boss boomed in her ear. “New development in the case.” Blackfeather paused. “A hiker found one of the missing girls in a culvert near an abandoned mine. Bites, claw marks. Throat ripped open. Damn thing nearly tore her head off.”


“Based on the paw prints around the body, the first responders are saying these weren’t bear bites. More like a dog—or wolf.”


“Boss, aside from zoos and wild animal preserves, there are no wolves in the eastern U.S.”
He sighed. “I stand corrected. Werewolf.”


Her stomach lurched, and she gripped the armrest so hard her knuckles turned white. Shit. Shit. Shit. A werewolf attacking one of its own? Why? What the hell was going on?


“West Virginia Division of Homeland Security has a car waiting for you, fully loaded with everything you’ll need for the investigation. Get to that scene.” Her boss clicked off.


Bossy desk jockey.
A flush of shame rushed over her. He’d taken on the orphan Anomaly Defense Division of the Science and Technology Directorate that no one else wanted, along with a mission no one else supported or believed in. As abrupt and abrasive as he could be, the Gulf War veteran deserved credit for giving her the opportunity to pursue what everyone else thought was something out of the tales of The Arabian Nights: jinnis. With the needed proof of werewolves and jinnis from Project Aladdin, support surged into the division. A stable funding source made her jinni hunting work possible So far, it seemed wherever there were werewolves, there was jinni activity.

This case was no different. According to the report, relationships between the local humans and werewolves were more than cordial. They were so intermarried, almost everyone was family. A large non-denominational wedding facility placed Summertown on an international list of destination weddings, like Hawaii and Las Vegas, but specifically for werewolves. A thriving bed and breakfast trade supported the wedding industry, along with other leisure activities, such as biking, hiking, white-water rafting, and winery and sightseeing tours. Murder of a werewolf girl wasn’t just bad for the family, it was bad for the town.