Guest Blog & Giveaway: Running in the Dark by Regan Summers

UFI welcomes Regan Summers Author of The Night Runner Series. Thanks for Joining us!!


The Far Side of the Honeymoon

One of the things that I love about paranormal romance and urban fantasy is the urgency of the stories. Yes, you have the love interests, but you also have lives hanging in the balance. Entire cities or worlds at stake. The active hand of fate swinging between fickle and cruel.

It’s so exciting, but I’m always curious as to what comes after the crisis is averted and the couple rides off into the sunset. How does a happily-ever-after work for a couple that was thrown together under dire circumstances and otherwise might not have given each other the time of day?

This is why I love reading and writing series with recurring characters. We get to not only see the most critical hours of their journeys, but also the softly-spoken scenes when the couple is alone, as well as their sacrifices and struggles as they adapt to each other and their new arrangement. Sometimes staying together is more dramatic than fighting off bad guys.

Don’t Bite the Messenger, the novella-length first installment of my Night Runner series ends on a challenge. Our couple, human courier Sydney Kildare and vampire Malcolm Kelly, have fallen into each others arms but now they’re going to see if a relationship can actually work.

She doesn’t trust easily and he has a lifetime of secrets.

While they should be in the honeymoon phase of their relationship, exploring and fawning over each other, fate’s not on their side. Instead, in Running in the Dark, we see Sydney adapting to a new place – Santiago, Chile – and a new role – the bottom of the courier food chain, when she’s used to being at the top. Add to that her internal struggle with the realities of being with a vampire and a few disquieting figures from Malcolm’s past, and living happily-ever-after is the last thing on Syd’s to-do list.

This new couple will have to find a way to survive if they want to stay together. 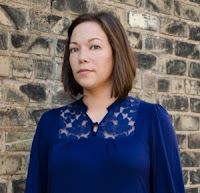 Regan Summers lives in Anchorage, Alaska with her husband and alien-monkey hybrid of a child. She is a huge fan of the low profile. She likes books, ottomans with concealed storage, small plate dining, libraries, Corporal Hicks, some aspects of pre-revolutionary France, most aspects of current Italy, and books.

Her Night Runner series, including Don’t Bite the Messenger and Running in the Dark, is available wherever e-books are sold. 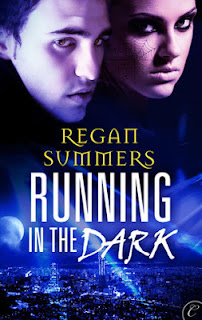 Running In the Dark
Night Runner #1