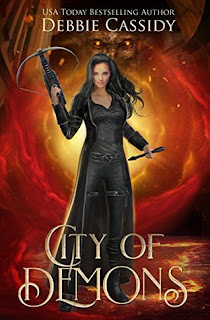 If Buffy and Angel could have banged without him going all evil, then we would have had Wilomena Bastion.

Dragons suck, like literally suck the life out of you if you let them. Trick is not to look them directly in the eyes, like ever. So, the day Wila finds herself staring into the most dangerous Draconi’s pretty, emerald peepers, she knows she’s royally fucked.

No one said saving a bunch of kids from being served up as treats to the dragon liege was going to be easy. Options are limited—immediate execution or servitude, and Wila prefers to have her head remain firmly on her shoulders.

Now, the self-professed dark avenger must work to bring down a resistance of demons hell-bent on making life difficult for the dragon liege. And, if that wasn’t bad enough, her new position comes with a partner, the dragon liege’s favoured demon enforcer; a creature of fire, fury and washboard abs who—let’s face it—is just gonna cramp her style.

With the help of a ghostly receptionist, a talking dog and the thing that lives in the basement, Wila will be forced to take on a most dangerous task. It looks like some serious brooding is on the menu, because for the first time in forever, Wila isn’t sure she’s up to the job.

A city filled with monsters needs a woman who can kick ass, and Wilomena Bastion is just the gal for the job.


CITY OF DEMONS was a great start to a new series by Debbie Cassidy.

I love a strong, snarky protagonist and Wila fit the bill. There is a lot of mystery surrounding her, but I had no issue with liking her. I enjoyed her job as an investigator and I enjoyed learning about her housemates. I'm very interested to learn more about Wila as she learns more about herself.

When the author says this is slow burn reverse harem romance, she isn't exaggerating. It was so slow it's frustrating. There is a lot of romantic tension all over the place and no action. It might be torture waiting, but I'm hopeful that it will be great when it does. I also hope that there isn't a crap load of men in the harem because there are a lot of possibilities and it might be a bit much if they all end up in her bed.

With the little information we got, I enjoyed the world so far. There seems to be a lot to it with a lot of players involved. It will take a bit to really understand it all, but I look forward to learning more with book two.