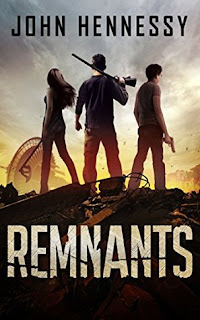 
Night one brings marked doors to every home in the world. Day one sees confusion and fear. Night two takes half the planet’s population. Day two leaves panic and mayhem. Night three watches the second half disappear. Day three the fight for survival begins.

The world ended in silence. No birds chirping. Dogs barking. Cars thrumming. No people going about their busy lives. After the aliens arrive, they clear the globe of every living animal, except for a few scattered bands of human survivors. Now Maggy, a strong-willed intellectual, leads Darrel and Félix, two shy geeks, on an expedition down the west coast, searching for safety in a landscape that promises only a gruesome death, as the aliens hunt down the remnants for sport. But when one of them is abducted, a much more sinister truth unfolds, one that will change the course of humanity forever.

Remnants is perfect for fans of The 5th Wave, alien invasions, the apocalypse, and just pure sci-fi adventure.

Note: For verisimilitude of teenagers facing the apocalypse, this book contains strong language, and is intended for mature young adults. If such words offend you, you might not enjoy this book.

There was a lot of unbelievable going on in REMNANTS which made it really hard to enjoy the storyline. In fact, I'm actually surprised I read the whole thing and didn't just give up on it.

On top of some of the unbelievable things that happened in REMNANTS, I didn't feel any sort of connection to the characters. One in fact annoyed me. I think if the characters were more developed, I might have connected a bit more. They are just kind of thrown into the mix at different parts of the storyline. I think I needed more back story on them or more character advancement throughout.

It really all boils down to the fact that a lot in REMNANTS was in no way believable. How am I supposed to believe that trained military personnel would not be more qualified and successful in defeating the alien invaders than a group of young teens? Could they maybe come up with ideas? Sure, but actually be the saviors of the world? Especially THIS group of teens. I just didn't buy it. I have zero interest in reading more.