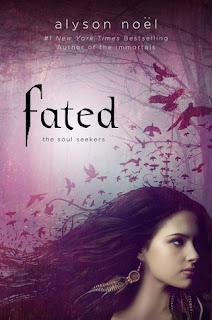 Lately strange things have been happening to Daire Santos. Animals follow her, crows mock her, and glowing people appear out of nowhere. Worried that Daire is having a nervous breakdown, her mother packs her off to stay in the dusty plains of Enchantment, New Mexico with a grandmother she’s never met.

There she crosses paths with Dace, a gorgeous guy with unearthly blue eyes who she’s encountered before...but only in her dreams. And she’ll get to know her grandmother—a woman who recognizes Daire’s bizarre episodes for what they are. A call to her true destiny as a Soul Seeker, one who can navigate between the worlds of the living and the dead. Her grandmother immediately begins teaching her to harness her powers—but it’s an art that must be mastered quickly. Because Dace’s brother is an evil shape-shifter who’s out to steal her powers. Now Daire must embrace her fate as a Soul Seeker and find out if Dace is one guy she’s meant to be with...or if he’s allied with the enemy she’s destined to destroy.

FATED is also available in Audiobook Enjoy a sample clip

Daire has traveled the world with  her makeup artist to the stars Mom.That was until the day the crows and glowing people came to her in force and she was sent to live with the Grandmother she has never known about because her mom and everyone else is about to commit her to a mental hospital. Daire learns she is one in a line of many family members that has a gift that she must learn to control before evil takes it from her.

I have mixed feelings about FATED. There were some great parts and some not so great parts. Some characters I liked and some I dint. I felt like the story was really slow at some points but greatly paced at others. The plot was interesting enough and for the most part I enjoyed the storyline but the goals of the main character seemed to change more then I cared to follow. In all honestly the book doesn't stick out to me. I didn't hate it but I didn't love it.

I definitely think the series has potential and I will probably grab a copy of book 2 from the library but its not a must read series for me.

Prize: e-Copy of Hunting the Shadows