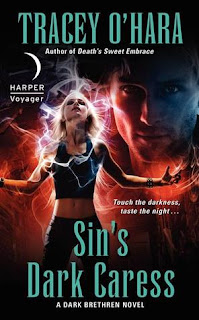 
An ancient darkness has risen from the ashes…and terror has been loosed upon an unsuspecting world.

Forensic witch Bianca Sin has never seen anything like it: homeless teenage girls torn to pieces by dark magic in the cold shadows of the city. More terrifying still is the symbol written in blood on an alley wall—the unmistakable seal of the Dark Brethren.

Teaming up with NYPD homicide detective Lancelot McManus and an elite task force headed by the shapeshifter Oberon DuPrie, Bianca knows her worse fears have finally come to pass. A new war of annihilation is looming that will plunge the worlds of vampire, shapeshifter, and human into chaos—and two adversarial tribes locked in uneasy truce will need to take up arms together to save the children. Trust will be essential for Sin and McManus, as the hunt forces them to confront their deepest terrors.

For the ultimate evil is no longer approaching.


Book 1 of the Dark Brethren NIGHT'S COLD KISS remains my favorite of the series. It did a fabulous job of drawing me into the story so that I wanted to read more of what would come in the series. Book 3 SIN'S DARK CARESS was a good addition to the series. It follows Bianca Sin and Lancelot McManus as they investigate a string of mysterious crimes.

The other two books were heavy on the relationship front but SIN'S DARK CARESS is more about the story and mystery then relationship. There is some romance but nothing like the previous 2 books in the series. I really liked both characters. Bianca is a witch who never came into her powers so she is pretty much the dunce to the other witches. She finally comes into her powers when she bonds with a dragon of all things and happens to be extremely powerful. McManus is an addict. He is addicted to alcohol but also a drug called Neon Tears. You can see the attraction to each other but they take forever to act on it. The case they are on was extremely close to Bianca. It involves others with powers and even people that she knows personally. The whole case is pretty gruesome but fantastically so. It grabs your attention and makes your heart go a little faster then normal trying to see what will happen and who that something will happen to. The only thing I missed is a bigger role of the characters from the previous books.

O'Hara has an easy to get into writing style with great descriptions of her world and characters. I would recommend starting from book 1 or even DANTE RISING which is a prequel to NIGHT'S COLD KISS. I will continue to follow the series and hope we get some more of my favorite characters from previous books.