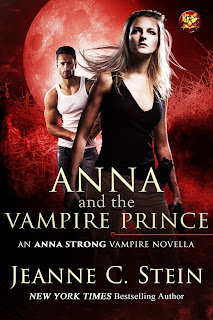 Vampire Anna Strong should be enjoying life with her new husband, Frey, but she’s too devastated by the loss of her mother to focus on much else. That is, until her niece’s best friend is kidnapped, and Anna leaps into action.

Angry citizens blame the recent rash of kidnappings on France’s immigrant population and threaten retribution that could upset the economy of the entire nation. If Anna is going to save the girl and her family vineyard, she’ll need the help of one of the oldest vampires in existence—her good friend Vlad.

Vlad and Anna set out to solve the kidnappings and save Southern France, but they soon discover the stakes are higher than they imagined. If they fail, it could be the end of the world as they know it.

Jeanne lives in Denver, CO and is active in Rocky Mountain Fiction Writers (where she was honored by winning the Writer of the Year award in 2008 and was nominated again in 2011.) Her newest venture, The Fallen Siren Series, is paranormal romance written in collaboration with Samantha Sommersby under the pseudonym S. J. Harper.  The first book in that series, Cursed, debuted in 2013. A prequel novella,Captured, is available free and the second book in the series, Reckoning, was released October 7, 2014. Novella 2.5,  Forsaken, is available at all online stores.

For more information on other books by Jeanne, visit her official website: www.fallensiren.com