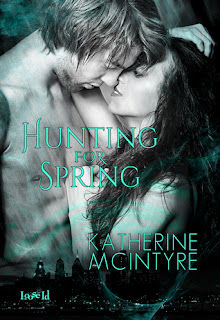 HUNTING FOR SPRINGS had an original concept with a good cast of characters.

I want to start out by taking about the characters. As a hunter, Conor is expected to have zero emotions and kill without a conscience. Thankfully for him he has plenty of emotion and empathy. I found him to be tough, yet willing to give people the benefit of the doubt. Brenna's hiding a pretty big secret and knows Conor—as a hunter—will turn on her as soon as he finds out. She is pretty guarded—for good reason—, but you really get to know her as she opens up while partnering with Conor.

The romance between Conor and Brenna was one of those instant attraction, mutually guarded kinda things. Both have a huge draw towards each other, but are hesitant and don't trust each other off the bat. When they finally act on their feelings, events happen that pull them apart, only to act on their feelings again later and stick with it.

Although I found the story to be original and the characters like-able, I just didn't love everything put together. I wasn't excited to see what would happen next and I found myself bored at times waiting for the next big event. I probably wouldn't pick up a second book if there was one.