Review: Damn Him to Hell by Jamie Quaid 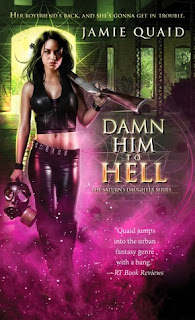 Justice is blind. Justine isn’t. Book two in the Saturn's Daughter series, in which Tina Clancy is gifted with the power to dispense justice...for good or evil.

Tina Clancy is adapting to her new life as one of Saturn’s Daughters while living in the toxic part of Baltimore known as The Zone, and occasionally acting as a champion of the downtrodden, the weird, the innocent...and the sometimes not-so-innocent.

Just when she finally lands a real law job, the Zone is blasted by poisonous gas and her sometimes-boyfriend starts receiving visitors from Hell. He’s none too pleased about that, or in Tina having sent his granny to Hell in his place. For that matter, neither is granny…


I was excited to jump into DAMN HIM TO HELL, I thoroughly enjoyed the world of Saturn's Daughter from the first chapter of book 1. The zone is a place like no other and the people and creatures that live there keep you guessing.  Although there is a lot going on in book 2, I unfortunately found myself board at times while reading. I don't know if it was over explaining or dragging out of events. Maybe both at points? Despite that, I enjoyed the character growth.

Tina is now a lawyer and moves forward in her career. She has a lot of trouble with figuring out her powers and if she is using it for good or evil. I enjoyed the advancement in that particular story like. Andre opens up a tad bit, NOT much I warn you. There is so much to learn about him. I kept waiting for something to happen between Tina and Andre but kept waiting... and waiting. The sexual tension was ridiculous and great at the same time.

I enjoyed BOYFRIEND FROM HELL a bit more than book 2 but it was still a nice continuation of the series. I'm invested in the characters so I will be waiting for book 3.