Promo + Giveaway: My Soul To Keep by Kris Norris 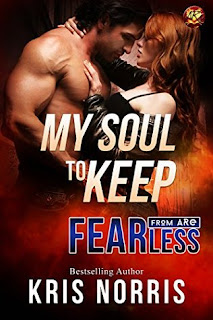 My Soul to Keep
Fearless #5
ARe

From the moment Detective Caitlyn Decker arrives at the scene, she knows this crime is anything but a routine killing. The cryptic note. The contradictory evidence. The violence. There’s no doubt in her mind her life’s about to get complicated. Add Special Agent Deacon McGraw into the mix—a man she’s had an unfortunate crush on for the past six months—and it’s shaping up to get downright messy.

Deacon has waited twenty years to solve his father’s murder. If his calculations are correct, this recent killing is connected to it, and the start of something grisly. After nearly convincing himself his father’s outlandish theories on a cold case were nothing more than a slow slide into madness, Deacon’s suddenly faced with a harsh truth—no one’s going to believe him, either.

Caitlyn’s not sure what to make of Deacon’s claims. But she’s willing to give him a chance—one that quickly translates into more than just a working relationship. Becoming lovers carries more risks than simple heartbreak. One miscalculation, or a loss of faith, and they just might lose their souls.

Kris Norris is a jack-of-all trades who's constantly looking for her ever-elusive clone.

A single mother and slave to chaos, Kris started writing some years back, and it took her a while to realize she wasn't destined for the padded room, and that the voices chattering away inside her head were really other characters trying to take shape. (And since they weren't telling her to conquer the human race, she went with it. Though she supposes if they had...insert evil laugh).