Review: For the Blood by Debbie Cassidy (@amoscassidy) 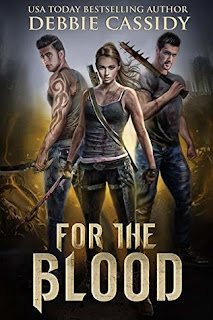 Stay alive at all costs. No attachments, no looking back, no emotion.

The last thing my father gave me was a key. No explanation, no details, just a key. The last thing he asked of me was to take the key to a set of co-ordinates. But survival in a fallen world filled with Feral isn't easy. The Fangs and the Claws, once upstanding members of society are now slave to the virus, hunting indiscriminately under a perpetually full moon.

They are a new breed of monster—beasts of both fang and fur. Unaffected by the sickness, they crave only one thing, and it runs through my veins. Survive, my father said. Look out for no one except yourself. But sometimes the only way to survive is to make attachments. Sometimes the only way to live is to accept a dance with death. And right now, for me, the path to survival is in the blood.
Here’s to hoping it doesn’t kill me.

Eva was likable. She is a strong female who knows that she can't give a crap about everything going on around her if she wants to stay alive, but is still willing to sacrifice her life for a few things she believes in. She has had to fight really hard to get to the co-ordinates her dad left her before he died and it shows in the way she thinks about things.

Let's talk about the men in this series. I don't really feel like I KNOW any of them yet, but from what I do know so far I have a few thoughts. I'm not quite sure if I want Tobias to be found. I mean, it would be nice for him not to be dead at the hands of the feral fang, but I don't totally have a strong preference for him to make it back into the story or not. I really like Ash. In fact, I liked him from the moment he was introduced, there was no time needed to like him.  I need to find out more about Jace. He kinda just IS at the moment with no real feelings on my part for or against him. Logan comes off as a bit of an ass, but I don't dislike him. Noah grew on my over time, but I like him and want to know more about him. I see multiple sparks forming.

The plot drew me in and I feel like the information that we have gotten so far has been enough for me to get into the storyline, but there is definitely some more world building to be done. The action is strong in FOR THE BLOOD and starts pretty quickly upon starting to read. It did take me a chapter or two to get into the story as it took me a bit to figure out what was happening, but I had no problem staying in once I was there. I plan to read more from this series.