I like to draw. I do my own book covers, including illustrations and other art. You’ll see lots of art popping up in my feed when I’m not busy writing.

What down time? Ha ha ha. I have two young boys, a fly-in-fly-out husband, I volunteer at the Romance Writers of Australia, work part time in a bookstore and do freelance graphic design. But I read and watch my favourite TV shows like Arrow, Flash, anything superhero or paranormal—just like the books I like to read.

The aha moment when you come up with a concept or hook that drives the rest of the story and the ideas keep flowing. Usually, this happens to me when I’m listening to music.

Thanks to another author friend of mine, I now listen to the same set of music every time I sit down to write. What this does is remind my brain of the state of flow it was in the last time it heard the music and put me in that same flow straight away so the words come quicker. I listen to classical or piano music of popular songs.

Ilona Andrews was the one who started me off with her Kate Daniels series. I also love Nalini Singh’s Archangel series and Darynda Jone’s Charlie Davidson series. I picked a few more of my favourite in the Fall in Love with Urban Fantasy Giveaway I’m hosting at my website http://lanapecherczyk.com/giveaways/soulthing/

How would you pitch The Game of Gods Series to someone who has not heard of it before?

Evolution is the Game, Gods are the Players, Humans are the Avatars and Witches are the Glitch.

Roo Urser has the same powers as the enemy and must hide her true nature for fear of being burned at the stake. But when a devilishly handsome hunter comes to down, she learns there are darker things that go bump in the night, and she might be one of them. Soon, staying safe is a constant struggle. Sometimes safe is a never-ending game.

Can you tell us a little bit about the world that The Game of Gods series is set in?

The Game of Gods series is set in an alternate world similar to ours in the not too distant future. Gods download their souls into earthly bodies so they can live a hundred times over and play a game to the death in the shadows of the human world. They didn’t count on witches evolving and the mayhem that ensued. Humans discovered these witches and burned as many as they could until they believed they won. But witches weren’t defeated, only hidden, as were the gods. And this is where my series starts off—a girl who has no idea where her powers cam from but ends up knowing she’s a cross between the powerful gods and the evil witches.

Do you have a favorite scene in Soul Thing?

Oh there are so many. The first time Roo meets Cash, the first time she meets the cockney egotistical god-of-the-in-between, or the first time all the pieces of the puzzle start to slot together after a witch attempts to kill her. But one of my favorite by far is when her new powers overwhelm her and she realises this god thing isn’t all it’s cracked up to be. Roo can sense the energy of all living things, and when she’s at a party with hundreds of people dancing, this energy affects her in a very unusual way. It was so much fun to write. I love putting my characters in awkward, funny and dangerous situations.

My favorite is Marc who is the Gamekeeper and the god-of-the-in-between. He was loosely based on a series of gods from different myths that all have a link. I wanted it to seem like these myths were steeped in a single race of beings that had visited our planet thousands of years ago. I researched Hermes, Loki and Thoth. Marc ended up having a larger than life personality that simply took over the page every time he appeared. I loved this character so much that I wrote a short novel (coming out in March titled The Devil Inside) that features a story told from his point of view and the other main hero, Cash. He’s hilarious, clever and socially inept at the same time. A bit like Lucifer from the TV show.

The hardest to write about was the villain. Finding the right sinister motivations and tying it all together so that it fits into the overarching series plot was harder than I anticipated. Hopefully Petra and another villain I won’t mention (spoiler alert) come off evil enough to have you hating them but feeling sorry for them at the same time.

I have three more books in The Game of Gods series to come out by May this year. Then after that I’m working on a superhero romance that’s Batman meets The Black-Dagger Brotherhood series and is called The Deadly Seven. It’s based around a disgraced group of vigilantes who each have the power to sense deadly levels of sin before a crime is about to be committed. To avoid falling prey to the sin they fight, they must find a soul-mate who embodies the exact opposite of their sin. Easier said than done when they have to protect a world that has lost faith in them.
__________________________________ 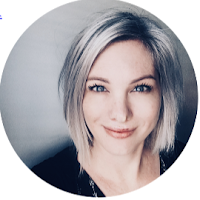 Lana Pecherczyk is a freckle-faced writer from Perth, Western Australia. She’s a fan of 'pro-caffeinating' and writes in Urban Fantasy and Paranormal Romance. Basically if it’s got sexy heroes, thrilling action and a kick-ass heroine, you know she’ll write it because she loves reading it.
When she’s not writing the next great novel, or wrangling the rug rats, or rescuing GI Joe from the jaws of her Kelpie, she fights evil by moonlight, wins love by daylight and never runs from a real fight.

You can find her books on Amazon and other good online retailers. 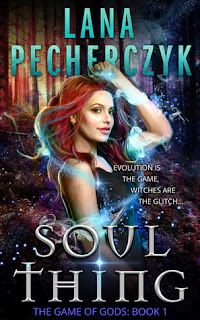 
Evolution is the Game, Witches are the Glitch

After a decade long war, witches have been obliterated, or so the world thinks. A precarious peace settles and, for the small town of Margaret River, life returns to normal, but for Roo, the hard work is just beginning.

Roo works at the local bar, is a little facetious and can’t wait to high-tail it out of there to keep her powers secret. She’s not certain where they came from but the last thing she wants is to be burned at the stake. Hiding in plain sight seems to work until Cash, a darkly handsome hunter, arrives with disaster in his wake. Witches aren’t defeated, only hidden, and there’s one gunning for Roo and her family. The recent war only touched the surface of the preternatural world and with Cash’s help, Roo learns there are worse things that go bump in the night... and she might be one of them.

Soon she must make a choice—risk exposure to save her loved ones, or remain hidden and safe. But sometimes safe isn’t an option. Sometimes safe is a never-ending game.

To celebrate the relaunch of Soul Thing, the first book in the Game of Gods series, I’m hosting a giveaway!

I want you to fall in love with Urban Fantasy as much as I have, so I’m giving away the first in a series from my favorite UF authors – in old school print!

One lucky person will win:

• A total of 11 real (touch them and faun over them on insta) books in total. The joy of starting a new amazing series is priceless!
• A signed copy of Soul Thing by Lana Pecherczyk (me!).
• Ten of my favorite Urban Fantasy first in a series, print books all with a mythological, gods, or evil spirits theme. These ten books are: Unholy Ghosts by Stacia Kane, First Grave on the Right by Darynda Jones, Gameboard of the Gods by Richelle Mead, Witches of the East by Melissa de la Cruz, MoonCalled by Patricia Briggs, Magic Bites by Ilona Andrews, Dead Witch Walking by Kim Harrison, Grave Witch by Kalayna Price, Angel’s Blood by Nalini Singh, and Touch the Dark by Karen Chance.

Choose all the bonus options to gain yourself extra entries! Good luck.

LINK: http://lanapecherczyk.com/giveaways/soulthing/
Posted by StacyUFI at 3:00 AM 2 comments: