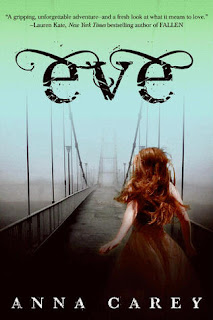 
Where do you go when nowhere is safe?
Sixteen years after a deadly virus wiped out most of Earth’s population, the world is a perilous place. Eighteen-year-old Eve has never been beyond the heavily guarded perimeter of her school, where she and two hundred other orphaned girls have been promised a future as the teachers and artists of the New America. But the night before graduation, Eve learns the shocking truth about her school’s real purpose—and the horrifying fate that awaits her.
Fleeing the only home she’s ever known, Eve sets off on a long, treacherous journey, searching for a place she can survive. Along the way she encounters Arden, her former rival from school, and Caleb, a rough, rebellious boy living in the wild. Separated from men her whole life, Eve has been taught to fear them, but Caleb slowly wins her trust . . . and her heart. He promises to protect her, but when soldiers begin hunting them, Eve must choose between true love and her life.
In this epic new series, Anna Carey imagines a future that is both beautiful and terrifying. Readers will revel in Eve’s timeless story of forbidden love and extraordinary adventure.

Eve spent most of her life in a school for girls, she has looked forward to her graduation so that she can move onto the new school where she will learn her trade which will take her to the City of Sand and her new life. All her thoughts of her future get turned upside down on the day before her ceremony when a schoolmate Arden, someone who she does not like tells her what really happens across the lake where she thinks her new life is going to begin. It all starts a journey that will make her grow up fast, get over all her brainwashing, learn what she really wants and see her world for what it really is.

The book has a ton of character building, adventure, suspense and action. The plot flowed pretty well, I found some thing inconsistent at times but it wasn't enough to take the enjoyment of the story away.  I enjoyed Eve's progression from naive book smart school girl to a young woman with a backbone and the start of street smarts. There were definitely times where I wanted to yell at her and ask her what the heck she was thinking with some of the moves she made, and the people she put in danger. I also liked Arden from the beginning, she was nothing like what Eve thought she was and as the story continues their bond as friends grows into something extraordinary, I really hope to see her in book 2. Caleb the romantic interest also had a really tough childhood. He was also an orphan and we find out that the boys are sent to labor camps. He was easy to like and fit in the story well. I wish we would have gotten a little more information about the plague. Where did it come from? Is there still a big threat or has it been eradicated? Some stuff about it is just left to the imagination really. I have to say I hated the ending. After everything that Eve and Caleb went through I just don't get it. I of course cant tell you what happened but my thoughts when I read it was Really?? After all the fighting and declaring your love your just going to go in? And your just going to turn around and go back? Just doesn't mesh with me. I'm sure it will be rectified in books to come  but I really disliked how EVE ended. I enjoyed the book and didn't want to put it down at any point so I will definitely look out for book 2.