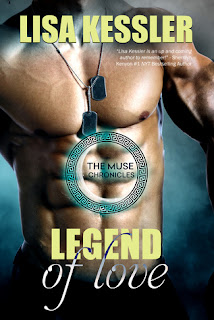 Callie O'Connor's life has never been the same since the Muse of Epic Poetry came alive inside of her. Now she's on the other side of the country, working as civilian psychologist for the Navy, and leading her Muse sisters in their quest to reopen the Theater of the Muses.

But nothing could have prepared her for Hunter Armstrong. He's a Navy Seal, driven, confident, and dangerous. And he plans to do more than just protect her.

The gods couldn't have picked a better Guardian. But as Hunter soon discovers, Callie has some skeletons of her own in the closet, and loving her could lead to his destruction.


LEGEND OF LOVE was just as fast paced and full of romance as book one, LURE OF OBSESSION. We learned a lot about the world of the muse chronicles in book one, so book two stuck to the continued storyline and character love story.

Callie is the Muse of Epic Poetry and isn't looking for a relationship, so when Hunter Armstrong walks into her office and starts to flirt she tries very hard to keep him at arms length—even though she is just as drawn to him as he is to her. On top of her pact with her fellow Muse sisters preventing her from jumping into a relationship with Hunter, she has a fear of hurting another man. An old fear that isn't easy for her to get over. Luckily fate has a hand in things and Hunter ends up being her Guardian. I found Callie to be very determined, yet fun when she's able to let go. She is definitely someone I could see myself hanging out with.

Hunter loves his family so much that he joined the military to help take care of them. When he's sent home after a challenging mission that left one of his brothers missing in action, he is sent to a therapist. Hunter doesn't want to talk about it, but he is definitely interested in the therapist. Hunter quickly won my heart. He was loyal, protective and willing to go the extra step for those he cares about.

The relationship was the best part of the book. Hunter and Callie were made for each other. They had plenty of ups and downs, but there relationship felt real and their connection shined through the pages. The secondary characters, especially the Muses, continue to be a strong part of the storyline and I loved seeing them again and continuing their journey to open their theater and inspire everyone. Both Melanie and Nate also play a good part in LEGEND OF LOVE, it was nice seeing them again and seeing that they still have their happily ever after.

There is just something about this world and these characters that draws me in. BREATH OF PASSION—Erica's love story— is up next and I look forward to diving into it.