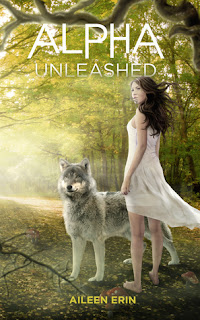 
Tessa McCaide has had it up to here with supernaturals. As the only half witch/half alpha werewolf around, she’s the obvious choice for ambassador to the humans when the magical communities seek to escape the shadows for good.

But coming out isn’t as easy as sending a press release. Vampire attacks are all over the news as the power-hungry witches play with dangerously dark magic and Tessa can’t promise any human safety when she and her friends are so busy battling for their lives.

Luciana leads the corrupt witches, and even though she failed to steal Tessa’s magic, she’s just getting started on her crusade for magical domination. Countless covens are turning dark, and if their demonic summoning isn’t stopped, it could mean the end of everything.


ALPHA UNLEASED starts off taking place during the same timeline as BRUJA as well as after. The flow between the two books was well executed and I liked seeing what was happening at St. Alibe’s while Tessa was gone.

Both Tessa and Dastien have grown as individuals and as a couple. I'm really glad that we got to see them mate, finally. It was a long time coming and when it finally happened I thought it was done well, but wasn't what everyone was expecting.

I thought everything written in the Luciana story line well done. She brought a lot of evil, drama and strife to the series and I loved hating her. The conclusion to her story line was well executed with a ton of action and maddeningly evil and shocking circumstances.

So, ALPHA UNLEASHED was the end of Dastien and Tessa's story and I am a bit sad. I really like them as the main characters, but I thought their story ended in a way that could have ended the series and left everyone happy with its outcome. I didn't think I was going to like Claudia as a main character, but I did and the Alpha girl series has a really great cast of secondary characters so I am sure I will love anything that comes in the future.