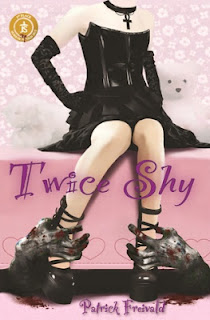 Ohneka Falls is a small, Western New York town where everyone
knows everyone and nothing of note happens. Ani Romero is a sixteen-year-old girl who wants to play sports, hang out, and kiss Mike, her middle-school crush. A childhood carrier of the zombie virus, she died at fourteen but didn’t become a mindless, brain-eating monster. Her controlling mother forces her to join the emo crowd to hide her condition behind a wall of black clothes and makeup, and her friends abandon her.

When creeper Dylan learns her secret, he falls into obsession,
with Ani and with death. She bites him in self-defense. Persecuted by the jocks and ignored by Mike, Ani struggles through the motions of life hoping her other’s research unveils a cure, or Dylan dooms them all to a hungry, walking death.

As her emo facade crumbles in the face of jealousy and obsession,
Ani knows that the worst thing she can do is be true to herself.


Most peoples mom's don't encourage their children to get into trouble and dress like they are constantly in mourning. But most peoples moms don't have zombie children. Ani used to be one of the popular kids, hung out with the in crowd, dressed to impress and had plenty of friend.  Now Ani is in with the Emo crowd, wears white makeup, black clothes and does everything she can to stay hidden.

Ani really just wants to be normal, go to dances, date boys, hang out with friends but to do all that would draw attention to herself. I found that Ani really did have a lot of the same issues that any other teen girl would have to deal with in high school just a few undead things on top of that. I think any teenage girl would get a kick out of her character though. The romance in TWICE SHY is awkward at times. Mike is a jock who Ani has always pined over. They used to be really good friends before the unfortunately zombie-ness took Ani over. He treated her like dirt in front of others, like a queen on their own and pinned for her on the side of all that. Awkward right? His girlfriend was a total B-i-t-c-h and did just about anything to try and show Ani that Mike would never be hers. The stalker angle was interesting fit perfectly into the book. I felt the way that Patrick portrayed Ani as a zombie was imaginative and all the things about her and her treatments were completely believable and fun to follow.

I was NOT a fan of the ending. I can honestly say I absolutely despised it actually. It seemed rash and just really threw me through a loop I didn't feel it should have thrown me through. There are quite a few twists thrown in to TWICE SHY but not a lot of action. Great imagination with a neat storyline. I would have preferred a different ending but what can you do?

Daughter of the Spellcaster (The Portal, #2) by Maggie Shayne
Rogue Rider (Lords of Deliverance, #4) by Larissa Ione
Undeadly (The Reaper Diaries, #1) by Michele Vail