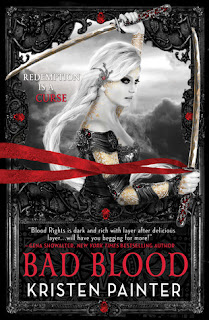 
Samhain approaches, bringing with it the final melding of the mortal and othernatural worlds. No one knows just how much power the night holds...

Violent murders occur in Paradise City as counterfeit comarré are systematically hunted. The police and the Kubai Mata have more than enough trouble to keep themselves occupied. As war erupts at home, Malkolm and Chrysabelle head to New Orleans to recover the Ring of Sorrows. Chrysabelle is forced to make a life and death decision and will realize that her relationship to Malkolm may have fatal consequences.

The clock is ticking . .

You can not start from BAD BLOOD if you have not read the rest of the series yet. Please do yourself a favor and grab book one BLOOD RIGHTS and Book two FLESH AND BLOOD before picking it up or you will be completely lost.

For me BAD BLOOD started out really slow. About halfway through the book it picked up and became just as entrancing as books 1 and 2. One of my big issues with the book is all the POV's. There are so many it gets kind of frustrating having to be inside everyone's heads and getting involved with one characters thoughts only to be shoved into someone else's.

Chrysabelle and Malkolm made some great progress on their relationship by both finally acknowledging their feelings for eachoter. The whole love triangle really bothered me for some reason and I'm glad that to say they moved past it in BAD BLOOD. Creek was not as involved with Malkom and Chrysabelle in book 3. He was definitely in the book but he was in the background and doing other things outside of being with Malkom and Chrysabelle. There is a new supernatural woman that shows up that I'm excited to learn more about. Seems like something might come of her and Creek, not sure if it will be good or bad.  Can Tatiana die already? I mean really what more will people fall for with her? She is beyond insane yet she keeps coming out and getting what she wants booo. The witches. Wow were they drama. Just when you think they were done they pop up again. I'm dying to know who Chrysabelle's father is. We get some good info towards the end but it just add's to the questions. I was thinking it had to be Dominic but now I'm thinking it cant be. The ending, Poor Chrysabelle when will she get a break? I cant imagine what will happen next but im invested in the series and will happily get book 4 as soon as it is released.

Winner: Acquainted with the Night by Piper Maitland

Thank you to everyone that entered!!
PRIZE: One copy (US winner-Print/International Winner-ecopy) of Acquainted with the Night

The winner chosen by Rafflecopter is…
Read more »
Posted by StacyUFI at 2:55 AM No comments: