Giveaway: Deep Down by Deborah Coates 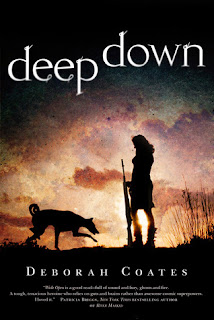 Deep Down
sequel to Wide Open

Death stalks the haunted, windswept prairie in this chilling sequel to Wide Open


Now that she's solved her sister's murder, Hallie Michaels has left the army and isn't sure what to do next. Her relationship with deputy Boyd Davies is tentative, there's still distance between her and her father, and she needs a job. The good news is, she hasn't seen a ghost in weeks.

All that changes when she gets a call asking her to help an elderly neighbor who is being stalked by black dogs, creatures from the underworld that are harbingers of death. When a black dog appears, Hallie learns, a reaper is sure to follow. And if the dark visions she's suddenly receiving are any indication, it looks like the reaper is now following her.

Meanwhile, strange events herald the arrival of ghosts from Boyd's past, ghosts the young deputy isn't ready to face. Refusing Hallie's help, Boyd takes off to deal with the problem on his own, only to find that he's facing something much larger and more frightening than he'd imagined.

Stalked by a reaper and plagued by dark visions, Hallie finds she must face her fears and travel into Death's own realm to save those she most loves.