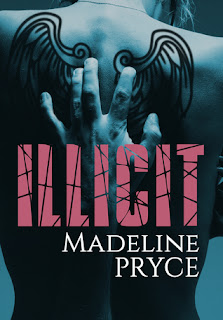 
An angel trapped in darkness, a sinner imprisoned, and a lust borne of destiny.

Eva has no explanation for the tattoo wings shimmering on her back or her ability to heal.

A night of unforgettable passion leads Peter and Eva down a dangerous path. The killer's trap grows ever tighter, forcing the two lovers to fight with everything they have.


I had a bit of a déjà vu moment when I started reading ILLICIT, the opening bar scene reminded me a lot of another of Madeline's books, WICKED MAGIC, and I had to stop reading for a second to make sure I hadn't already read it. The similarities end there though and I quickly started to enjoy the mystery and danger of the storyline. There were a lot of neat twists thrown in and I enjoyed the characters for the most part.

I am sad to say that I had a big issue with ILLICIT when it came to Peter's character. He could be extremely rude and way rougher than I expected. His treatment of Eva in some scenes was a bit hard to get through. That just isn't my type of love handling. The warning in the blurb is something you should really take to heart before you start reading ILLICIT because I can see some having an even tougher time with a few scenes than I did. Besides those issues I did like Peter when he wasn't being a royal arse. I liked Eva, I thought she had a few moments where she should have kicked Peter to the curb, but for the most part she did a good job of sticking up for herself. The romance between the two was super spicy as you can imagine from a erotic paranormal romance and there are a lot of sex scenes.

The storyline was my favorite part of the story. Madeline is a great storyteller and did a good job of making the story more than just the sex the characters were engaging in. I wouldn't have minded seeing more of the pack included in the story, but I enjoyed the parts where they were present.