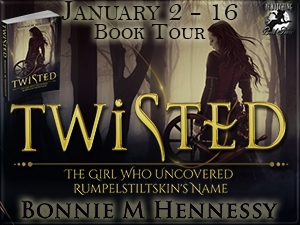 UFI welcomes Author Bonnie M. Hennessy. Thanks for Joining us!!

Hello! My name is Bonnie M Hennessy, and I just published a fairy tale reimagining made for grown ups entitled Twisted: The Girl Who Uncovered Rumpelstiltskin’s Name. Today I would like to talk to you about what inspired me to write this story. Let me start by posing a question: Have you ever gone back to visit your childhood home or your elementary school classroom that was dear to you only to find that it is way smaller than you remembered and the paint is peeling?

Well after having children I had the opportunity to revisit lots of things from my childhood, including legos, candy corn, and my fairy tale books that my hoarding mother actually managed to hang onto for nearly three decades. Legos are still fun, except when you step on them barefoot in the middle of the night and a slew of words you’re not supposed to utter now that you’re a mom fly out of your mouth. Candy corn is just as bad as I remember. Only now I worry whether or not there is Red Dye #40 in them. And oh, those fairy tales, how strangely dysfunctional, violent, unfair, and downright amoral they now sound. It doesn’t even matter if you use your softest, most soothing mommy voice to recount the tales to your children about Hansel and Gretel’s parents who abandon their children, the wolf who eats Little Red Riding Hood’s favorite grandma, or the evil stepsister who cut off her toes while trying to steal the man Cindy loves - or at least the guy whose party she crashed the night before.

It was during just such a cozy nighttime story hour that I reread the tale of Rumpelstiltskin from the yellowed pages of my childhood book. The first page’s illustration showed a demur girl bowing her head dutifully before a king who pointed his jeweled finger at her and, as the story goes, ordered her to spin a whole room full of hay into gold - all because the girl’s father had bragged that his daughter could turn anything she touched into gold.

Thanks a lot, dad. Oh, and in case you never read this one, if she doesn’t manage to spin the hay into gold, her dad will die. Nothing like a little pressure!

And let’s not forget the little guy with magic who tricks her into agreeing to give away her first born child in exchange for his promise to spin the hay into gold. She had to choose between her father, who was probably sweating in the next room, or some child she might have someday with a husband she hadn’t even met yet. Hmmmmmm. After the predicament her father put her in, I might have chosen my potential, future kid over him, but I guess she is a better daughter than I am.

A Glass of wine, an Itch, and an Imagination Run Wild

After I finished the story and put my daughter to bed that night, I had a glass of wine and kept thinking about this poor girl in the story who had been cornered and tricked by every man she came across in her life. Father. King (eventual husband). And magical little guy with no name. Every feminist bone in my body was annoyed, and I found myself imagining all the comebacks I would have said to these men if I were her. You know, the kind of stinging rebuttals you always think about after the argument is over.

Like an itch in my brain that I couldn’t quite reach, this girl’s predicament kept nagging at me until I got out of bed at 5:30 the next morning and snuck past my two little kids’ bedrooms and out the door to a coffee shop with my laptop under my arm. I started sketching out what this girl’s life must have been like. The first thing I knew for sure was that her father had to be a guy who imbibed a little too much at the local watering hole. You know the type, very jolly, red cheeked, everybody’s favorite uncle, but the kind who likes to talk - a lot. I figured that talking at the tavern must have become slurred bragging, which ultimately became so annoying that someone finally called him on his bluff. Unfortunately for his daugher, that someone was a guy with a title, authority and too much hay on his hands.
From there the story just took off. I knew that she had to be clever and determined to have survived what was probably not her father’s first bad choice, and she also had to be fiercely tenacious to have beaten that little guy with the magic who tried to trick her. I saw her as a natural fighter with a moral compass, born into a family whose weaknesses were completely foreign to her. Thus, at the tender age of nine, she found herself in the middle of a brothel coaxing her father to come home while her mother sat home sewing by the fire, a habit which would continue over the years. Twisted focuses less on the men who tried to manipulate a young girl and more on the young woman who outsmarted them all.

Now if that’s not the start of a good fairy tale, I don’t know what is. Maybe there were no brothels in the children’s tales I read, but Maeve’s house of vice pales in comparison to the murder and other sins inherent in traditional fairy tales.

Bonnie grew up a shy, quiet girl who the teachers always seated next to the noisy boys because they knew she was too afraid to talk to anyone. She always had a lot she wanted to say but was too afraid to share it for fear she might die of embarrassment if people actually noticed her. Somewhere along the line, perhaps after she surprised her eighth grade class by standing up to a teacher who was belittling a fellow student, she realized that she had a voice and she didn’t burst into flames when her classmates stared at her in surprise.

Not long after that, she began spinning tales, some of which got her into trouble with her mom. Whether persuading her father to take her to the candy store as a little girl or convincing her parents to let her move from Los Angeles to Manhattan to pursue a career at eighteen as a ballet dancer with only $200 in her pocket, Bonnie has proven that she knows how to tell a compelling story.

Now she spends her time reading and making up stories for her two children at night. By day she is an English teacher who never puts the quiet girls next to the noisy boys and works hard to persuade her students that stories, whether they are the ones she teaches in class or the ones she tells to keep them from daydreaming, are better escapes than computers, phones, and social media. 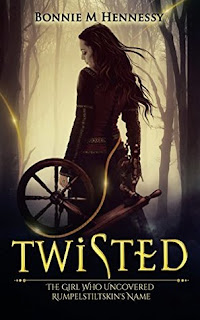 
An old tale tells the story of how a little man named Rumpelstiltskin spun straw into gold and tricked a desperate girl into trading away her baby. But that’s not exactly how it happened.

The real story began with a drunken father who kept throwing money away on alcohol and women, while his daughter, Aoife, ran the family farm on her own. When he gambled away everything they owned to the Duke, it was up to her to spin straw into gold to win it all back.

With her wits and the help of a magical guardian, she outsmarted the Duke and saved the day.

Her guardian suddenly turned on Aoife and sent her on a quest to find his name, the clues to which were hidden deep in the woods, a moldy dungeon, and a dead woman’s chamber.

This is not the tale of a damsel in distress, but a tenacious, young woman who solved a mystery so great that not even the enchanted man who spun straw into gold could figure it out.

Not until Aoife came along.