UFI welcomes Sandy James Author of The Brazen Amazon. Thanks for Joining us!!


Thanks so much for hosting my guest blog on my Brazen Amazon Book Tour! I’m thrilled to be at Urban Fantasy Investigations!

I thought what might be fun today would be to cast the “movie” of The Brazen Amazon. What better way to help readers get to know my hero, heroine, and the important secondary characters, than to let you see them all through my eyes!

The heroine is Gina Himmel. Gina is the Air Amazon. She’s twenty-six and a tomboy. After a short and angst-filled tour in the Air Force, she became an air traffic controller until she received the divine “call” to become the next in the line of Amazon warriors.

Gina is very tall—six feet, to be exact. She wears her hair short because she’s a no-fuss kind of girl. Her goddess—Ix Chel from the Mayan culture—gives her a supernatural gift. Whatever mood Gina has becomes a new highlight color in her hair. Red is angry. Blue is calm. She thinks it’s a great gift, until she realizes how open that makes her to everyone around her.

I picture Gina as Anne Hathaway in The Dark Knight Rises. Tall. Lithe but muscular. Just chop off all that hair like Ms. Hathaway did for Les Miserable, and you’ve got Gina Himmel!

My hero is Zach Hanson. From day one, he’s been Ryan Reynolds looking an awful lot like he does in Blade III and Green Lantern. Ultra fit and devastatingly handsome. Throw in some major intelligence, and you’ve got my Zach.

I can’t stop at just Gina and Zach when the other three Amazons are every bit as important to the story. Each book in the Alliance of the Amazons might focus on one of my ladies, but the “sisters” appear through all the stories. So let’s start with the oldest of the Amazons—Earth.

Rebecca Massee’s story is told in The Reluctant Amazon. She’s the embodiment of Mother Earth, and her patron goddess in the Celtic deity Rhiannon. I see Rebecca as Claire Danes. Blonde and pretty with an understanding smile and a sweet nature.

The Fire Amazon is Megan Feurer. No one else but Scarlett Johansson could play Megan, and I picture her looking much like the Black Widow character she plays in The Avengers—sassy, smart, and kick ass. Her powers were endowed by the Norse goddess Freya, and The Impetuous Amazon tells her story, including a lot of fun surprises.

The last Amazon is Water. Sarita Neeraj is Indian and lives a life deeply immersed in her wonderful culture. She’ll wear saris just as often as she’ll wield her sword. Because I’m a fan of the movie Bend it Like Beckham, I’ve always thought of Sarita as looking like Parminder Narga. I wrote the last book “seeing” the actress as I told Sarita’s story.

The Brazen Amazon released from Carina Press on May 6th. It’ a stand-alone story, but I do believe readers enjoy the series more if they read the books in order. The price for all the books has been drastically reduced for this new release, so I hope a few fans will decide to give my girls a chance. The series concludes with a bang in September 2nd when Sarita becomes The Volatile Amazon.

Thanks again for having me as a guest! Readers can find me at “sandyjamesbooks” on both Facebook and Twitter, or visit my website sandy-james.com to find links to all my stories!

Sandy lives in a quiet suburb of Indianapolis with her husband of thirty years and is a high school social studies teacher. She and her husband own a small stable of harness racehorses and enjoy spending time at the two Indiana racetracks.


The Alliance of the Amazons urban fantasy series from Carina Press has premiered with book 1, The Reluctant Amazon, book 2, The Impetuous Amazon, and book 3, The Brazen Amazon. The series concludes with book 4, The Volatile Amazon, in September.

Look for a new contemporary romance series from Grand Central Forever Yours in 2013/2014! 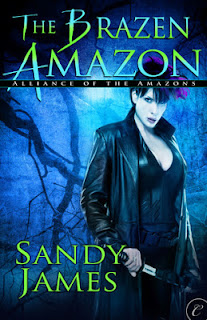 The Brazen Amazon
Alliance of the Amazons #3

Zach Hanson is a tech wizard, capable of creating and improving gadgets--including remote nuclear warhead launchers. But he's always known that he's destined for something more, something greater, something...supernatural.

Powerful Air Amazon Gina Himmel is one of four sisters called to protect the world from those who would do it harm. Demigods in league with an Ancient have been taking over the bodies of leaders in the military and technological sectors, and Gina is sent to San Francisco to watch over Zach.

Under Gina's protection, Zach is introduced to a world of ancient deities, rogue gods and the bold, brazen Amazons who keep humanity safe. Amidst the whirlwind of battle, Zach and Gina discover a love that could give them the power to save the world—or destroy it.