Early Review: Of Flame and Promise by Cecy Robson 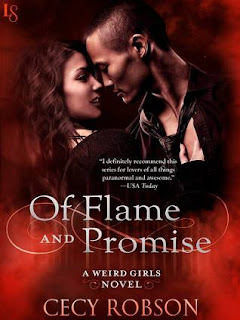 Cursed by a spell meant to destroy them, Taran Wird and her sisters instead developed unique magical talents. With the power of fire and lightning literally at her fingertips, Taran doesn’t fear much. Demons, vamps, whatever—bring ’em on! Only one thing terrifies her: commitment.

Taran is crazy about her boyfriend, Gemini, a sexy were with the incredible ability to split into two separate wolves. But after watching her sister go through heartbreak with the pack’s Alpha, Taran knows not to count on happily ever after—despite Gemini’s desire to claim her as his mate. Reluctantly, she agrees to meet his very traditional and conservative parents. Taran’s a badass with a mouth to match, and Gemini loves her for it. She’s just not positive these attributes will please Mom and Dad.

Unsurprisingly, every attempt by Taran to bond with Gemini’s folks proves disastrous. But in the end, Taran finds that winning them over means unleashing her powers . . . and proving that this foul-mouthed fire-starter is a force to be reckoned with.


We have followed all the Weird sisters since SEALED WITH A CURSE from Celia's POV and mind, it's time to see how Taran's mind works. Don't be fooled by the fact that OF FLAME AND PROMISE says it's #6 in the Weird Girls series. This is a novella, not a full size novel.

I want to start out my review by stating that I really hate going backwards in a series.The events in OF FLAME AND PROMISE take place right after the events of book 2, A CURSED EMBRACE, just from Taran's POV and with events in her life instead of Celia's. Now having said that, OF FLAME AND PROMISE manages to make the going back as painless as possible and pulls off a pretty great story.

There were plenty of laughs and a bit of tears from the first chapter to the last. I enjoyed diving more into Taran and Gemini's relationship. Taran fumbles a lot in OF FLAME AND PROMISE, but Gemini remains by her side through it all. I had no problems staying in the story and I am actually looking forward to being in Taran's head again. I do however hope we don't continue to stay in the past. I would like to see how things are going after the events of book 5, A CURSE UNBROKEN.

Forged in Ice An undying love threatened by darkness... James' worst nightmare has come true. From the grave his father has poisoned the woman he loves, and James will do anything to save her. Ainsley is stuck in a world she barely knows. She struggles to come to terms with the new life she never asked for and her intense connection with James. When darkness threatens to destroy everything, they must face their greatest fears and the possibility their love is no match for the darkness.
Haven't started the Forged Chronicles yet? Forged in Stone is on sale for 99¢ for a limited time!

The son of darkness is all grown up...
James is a Guardian. He is tasked with protecting the most important person in his world. For eight years he has done his job without complaint, but he has grown tired of living under the shadow of a father who is responsible for the most unimaginable violence and destruction his world has ever known. Ainsley is at a loss for what to do with her life. She hates her two dead end jobs and the family who betrayed her. She has resigned herself to living one day at a time, but she longs for an escape from her lonely life. When Ainsley finds James in her bed, their two lives and worlds collide. They may have both found exactly what they need, but the darkness James has been running from his whole life has just caught up.

Alyssa Rose Ivy is the bestselling author of more than twenty-five novels with over half a million books sold worldwide. She loves to weave stories with romance and humor, and she is best known for writing about college boys with wings and skinny dipping. After surviving law school and earning her masters in library science, she turned back to her creative side and decided to write. Although raised in the New York area, she fell in love with the South after moving to New Orleans for college. She lives in North Carolina with her husband and two young children, and she can usually be found with a cup of coffee in her hand.