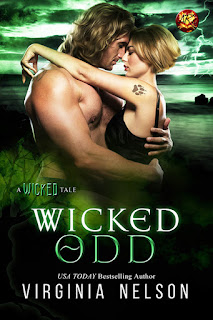 Wicked Odd
A Wicked Tale
ARe


Carmen finds it hard to trust—then again, her father went mad and had to be put down by her current Alpha. Carmen might hold a position of power within the pack, but part of her always wonders if they could turn on her as quickly as they did him. When she finds a man who she’s pretty sure the current alpha failed on a lot of levels, she decides to take matters into her own hands and prove Dara isn’t as perfect of an alpha as everyone thinks.

Seth lost his mate, but he survived. He couldn’t stand to watch other wolves happily carrying on with their lives and mates after he’d failed to protect his own. Dara allowed him his privacy and ensures that he survives, even if there are days when he wishes otherwise. When one headstrong and opinionated she-wolf decides she’s going to end the unique hell of his isolation, Seth has to make a choice…

Kick her butt to the curb or answer the call to claim her. But can he dare claim another mate when he knows he failed once to be the man his mate needed?


The stink of humans slathered in too much cologne and perfume competed with the smell of open beers and possible promiscuity in a cloud of inevitable shame—at least to Seth. He wasn’t sure why he still bothered to come down from his hill to visit the dance hall, but it was a ritual he practiced on one specific night of every year.


Seth grunted and nodded as he passed over the cover charge. “’Sup, buddy?”


“Not much. Haven’t seen you in ages. How the hell have you been?”


With a shrug, Seth headed past him and down the hall that led to the bar and dance floor. The ritual must be completed exactly for him to feel satisfied, which meant one beer on the outside patio, one inside, then he could go home.


Not that fulfilling the pattern actually made him feel any better at the end of the day. Still...


He ordered the first beer and headed outside with it. Few were out on the patio, but then again that was typical, too, for this time of year. Only the really dedicated smokers or secret lovers looking for a quiet dark spot would bother to brave the humid, still summer air—filled with tiny and annoying biting bugs—to sit outside.


Watching a single large-wing katydid perched on the fence helped him pass the time. He ignored the humans with their clouds of smoke and lust. The katydid busily cleaned his wings while Seth sipped the beer. It wasn’t as cold as he preferred, and he never drank this brand any other time of the year, but that, too, was part of the tradition.


Soon, his beer had been emptied and the katydid had flown to do whatever important insect tasks awaited him in the darkness.
Heading back inside, Seth caught the scent of a wolf and scanned the dance floor to see if he recognized whoever it might be.
He pinpointed the direction of the aroma to be near the stage, which meant the smell must be coming from one of two women dancing near the speakers. He couldn’t help the half smile the sight brought him. One of the women wore silver leg braces, yet danced with carefree abandon and a smile. Her movements might be restricted by her obviously weak legs, yet her joy flowed as effervescent as anyone else’s in the room, if not more. Next to her dark haired beauty, her dance partner looked particularly mundane. The other woman had boy-short blonde hair and seemed just as happy. Something about the pair caught his wolf’s attention, but he wasn’t sure what other than the fact it was good to see an obviously crippled woman having a good time with a friend.


Shrugging off the oddity, he moved to the bar to order the second ritual beer. Once he had it in hand, he headed for the small booth at the back of the dance hall as per routine. From there, however, he broke the pattern a bit. Instead of staring at the Elvis cut-out hanging on the wall below a clock with only fives—because it was always five o’clock somewhere—he watched the girls dancing.


At one point, the blonde went and got them both drinks, so they backed away from the dance floor to cool off then went right back to dancing. His wolf stirred again, but he disregarded it. But then the blonde looked in his direction, a flash of yellow in her eyes. His wolf more than stirred at the glance, practically clawing him from the inside. Unsettled, he stood to leave. He’d finished the beer and therefore the dance hall portion of the ritual.

At the door, someone caught his arm. “Hey, do I know you?”

Virginia Nelson, USA Today bestselling author, likes knights in rusted and dinged up armor, heroes that snarl instead of croon, and heroines who can’t remember to say the right thing even with an author writing their dialogue. Her books are full of snark, sex, and random acts of ineptitude—not always in that order. 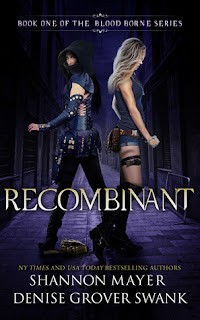 In the city that never sleeps, nightmares live in the darkness . . .

A series of grisly murders begin to pile up in New York City, murders that have no rhyme or reason and no leads. Unless one chooses to believe that the supernatural is possible.

The crimes have caught the attention of two very different women. A journalist fresh off the plane from covering the war in Iraq and a vampire who has chosen to hunt her own kind. Together they will form a reluctant yet unrelenting team.

As they slowly begin to crack the fissures behind a government cover up and bioterrorism, they find a truth that neither of them could ever have suspected. And now it's too late for either of them to turn away.

Even if it means their lives as they know them will never be the same.


RECOMBINANT is told from two different POVs. Rachel is a journalist who is searching for answers for a story she is working on. Lea is a Cazador (aka Vampire hunter) that was turned into a vampire against her will, but still hunts vampires. Stories with multiple POVs aren't my favorite type of stories, but when they are done right, I don't usually mind it. Unfortunately for RECOMBINANT, it started off a little too choppy going from one to the other for my tastes which made it a bit hard to get into the story. Thankfully it smoothed out a bit as the story progressed.

Both Rachel and Lea were interesting characters. They each are pretty bad ass in their own right and together they made a great team. There was a lot involved in the story line and it takes a bit to catch up with things, but it ended with a ton of action and drama which I love.

I have a lot of questions after reading RECOMBINANT. One of my biggest is that I expected Rachel and Lea to stick together. I just don't understand them going their separate ways at the end of the book. I thought the whole point of Rachel's new position as Leah's helper was for her to be by Lea's side? I am hoping book 2, REPLICA, answers that and the other questions floating around in my mind.