Profile/History
Sent to Jane’s house by Derek Lee. Trained in the U.S. Military, Ranger. Is licensed to carry in LA.

Has three purple hearts. MACP (Modern Army Combatives) level-four instructor.  Really, really good at setting explosives. He quit the military to take care of Alex. Likes combat, misses fighting, pitting himself against the enemy, misses the adrenaline rush. Also did a little construction for Uncle Sam. Calling someone a “civilian” is a huge insult from Eli.

Great short-order cook; Jane has to buy the food. Meat lover, but not a high-fat, pork-based diet. Jane says he keeps secrets like a madam – all tease and no share.

Dark gray eyes that might have a blue haze to them in direct sunlight, dark hair cut military short, skin as brown as Jane’s
He was ripped, arms like steel cables and a stomach she could have danced on. Wears unscented deodorant, no cologne, unscented shampoo, a body odor that says he showers often,  all pheromones and self-confidence and man. He is still-healing, jagged scar in a starburst pattern starting at his left jaw and down his neck to disappear into his shirt collar (shrapnel, maybe). A lumpy mass that still pulls on his almond-mocha skin in odd ways when he moves. 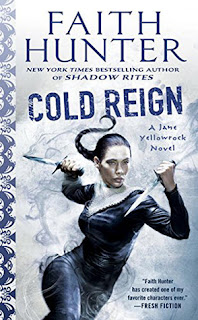 Jane Yellowrock is a shape-shifting skinwalker…and the woman rogue vampires fear most. Jane walks softly and carries a big stake to keep the peace in New Orleans, all part of her job as official enforcer to Leo Pellisier, Master of the City. But Leo’s reign is being threatened by a visit from a delegation of ancient European vampires seeking to expand their dominions.

But there’s another danger to the city. When she hears reports of revenant vampires, loose in NOLA and out for blood, Jane goes to put them down—and discovers there’s something unusual about these revenants. They never should have risen.

Jane must test her strength against a deadly, unnatural magic beyond human understanding, and a ruthless of cadre of near-immortals whose thirst for power knows no bounds…


It's finally time for the European vampires to arrive, but with any Jane Yellowrock novel, event's didn't exactly unfold like I thought they would.

COLD REIGN is chock-full of action, a TON takes place, and it felt like the stakes were higher than they had ever been before. It seems like Jane has been getting her butt kicked in the last few books and COLD REIGN was no different. If she wasn't the main character, I would have thought she was a goner at quite a few points in book 11.

Jane has a lot of 'family' already and it seems like more members are added to her household with each installment of the series. She hasn't always been OK with that, but it seems like she is finally starting to accept that everyone is there to stay. Jane's relationship with Bruiser continues to grow in strength and I really love the scenes with them being lovey, but I was a little concerned when Rick showed up. There were a lot of ways his showing up could have gone and I don't want to spoil anything for you by saying more, so I won't.

I was shocked with some of the revelations that came out in COLD REIGN. I don't want to say I didn't see them coming, because I think there was always a niggling in the back of my mind, but I was still really shocked with all that came out and the way in which they were revealed. I don't think there is much more I can say about COLD REIGN without giving away spoilers. I very much enjoyed watching Jane and her allies fight their newest conflicts and I look forward to seeing what will come next now that the storm that was the European vampires came through.