UFI welcomes Author A.M. Hudson. Thanks for Joining us!!

I’m great at baking cakes. I could have made a career out of making amazing wedding and party cakes if I wasn’t so in love with writing.

Watching Reign, TVD and Outlander… I like TV shows. I also spend time with my 4 kids and husband.

When I get into the flow and I pour page after page of really good stuff out.

Nope. I have 4 kids. So my routine is: close my bedroom door. Sit on my rocking chair. Open laptop. Write. Get up to fix problems with kids…. One hour later … close bedroom door. Rinse and repeat.

I can’t say I have favorites in those genres. I rarely read from the genre I write in case I accidentally copy an idea.

How would you pitch BOUND to someone who has not heard of it before?

A witty paranormal series about the dark world of vampires and witches.

Can you tell us a little bit about the world that BOUND is set in?

Vampires kill. But since a new species was rediscovered twenty years ago, one that feeds on vampires, there is order among immortals. Humans, unaware of this dark world around them, sometimes get dragged into the chaos or caught up in a romance with a sexy bloodsucker. Bound takes place in Australia before our heroine Elora learns about this world, but in book two she is taken to the University of Loslilian, where vampires and witches go to advance their skills or learn more about their powers.

Do you have a favorite scene in BOUND?

I love the witty banter between Ric and Lora (ELora), but I’d have to say the scenes where she helps ghosts cross over are my favorite.

Of all my characters from all my books, Jason Knight is my favorite. He was supposed to be killed off in my other series, but I just couldn’t do it. Now he’ll be getting his own series. The hardest to write was Ara from Dark Secrets, because I wrote her like a case study, so every time she could make the smart decisions I would make, I wrote her doing the opposite. She was exhausting, but she’s an award-winning character and I love her. I’m proud of how she’s grown.

AM Hudson lives and works in Australia. She has four sons, a husband that plays in a band, and writing is her full-time job. In her spare time she reads books and spends too much time on Facebook.

Some of her works include: The Dark Secrets Series (complete), and Willa Wicked. 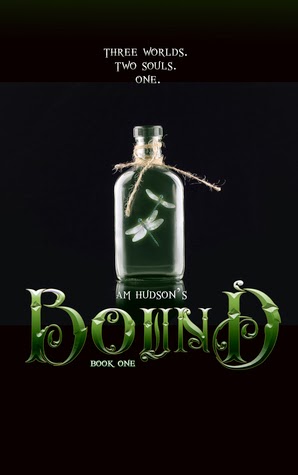 
Elora can speak to the dead, but she has an affinity with the undead.

Born of immortal blood, her curse not set to trigger until around her twenty-fifth year, she was sent away to remain unaware of and hidden from the world of magic. And from vampires. But after Elora befriends the cocky, self-loving Ric Mason, she discovers secrets about him and his distant link to her family that reshape her entire world.

A dark, sexy three-book series that will have you screaming for more...

In my state of distraction, I hadn’t noticed how far into the prison we’d walked. I passed the other tour group on my way out, trying really hard not to advise a few people to check over their shoulders, and when I reached the yard, I stopped dead. A wide space of black grass, darkened by the absence of the orange lights and by the high cream wall, stared back at me, empty and oddly quiet. Usually, there were other groups lingering after their tours, but tonight … no one. Nothing. Not even flashes of torchlight showing the whereabouts of the rent-a-cops.

A cold shiver passed over me, pushing the summer heat away from the thick walls behind me.
I put my head down and brought my shoulders up, making myself as small as possible, casting my eyes to the glowing streetlight outside the prison gates. A hundred paces across the yard, that’s all that stood between me and freedom. A hundred paces through almost pitch darkness. A hundred paces past four ghosts that just made themselves visible to me, knowing I could see them.

They all looked up as I stepped out onto the grass, their eyes falling on the tight fist of fear in my chest. My heart raced as each step drew me closer, and I tried to remind myself that they had no physical power. They couldn't actually hurt me. I hoped.

Tales of horror, of the tortures and other atrocities that led these murderers to prison, filled my head as I walked between them. I could feel the hairs stick up on the back of my neck as another one came up behind me. I wasn’t sure who it was, but his energy felt dark and menacing. Every cell in my body screamed at me to turn around and just take one look. But if I did, or if I ran, they’d know I was afraid and they’d feed on that—they’d follow me, most likely outside the prison walls and to my car. If I let them think they had no power over me, they might let me be once I reached the gates.

My breath hitched and my stride shortened as I quickened my pace. I hugged my chest, holding tight to the keys, but as I my heart leaped forward, just six steps away from the gates, my hand went loose for no reason and the keys dropped to the ground. The clunk didn't register until I stepped outside the prison walls and as I spun around to look back at the shiny metal cluster—a few steps away into the pitch blackness I’d just walked through—the spirits closed in, standing shoulder to shoulder. No faces now. No form. Just wavering pulses of light. They hovered there just in front of the keys as if challenging me to cross the threshold back into the prison.
__________________________________