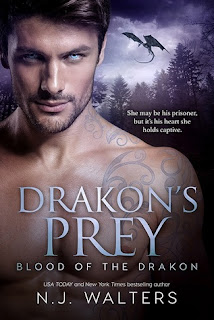 
Valeriya Azarov turned her back on the family business to write and illustrate children’s books. But with a sister who leads the Knights of the Dragon, it’s impossible to get away from the secret society whose mission is to destroy and enslave dragons. When information falls into her hands along with the opportunity to save at least one of the ancient creatures, she can’t turn away any longer.

When a woman moves into the cabin above Tarrant Cooper’s secret underground lair, he’s both suspicious and intrigued. He hasn’t lasted four thousand years being careless, so when he suspects her of being a part of the Knights, the plan is to kidnap her and find out how much the organization knows about him and his brothers.

He’s drawn to Valeriya, but trusting her could get him killed. Even if she’s a pawn in the war between drakons and Knights, giving her his heart would mean forever.

The Knights are after a Drakon and the sister of their leader has set out to warn him. DRAKON'S PREY starts off right were book one left off. Sarah and Darius are safe with another brother and Tarrant is in his home when a woman starts sniffing around the cabin and eventually ends up moving in.

I absolutely love watching an alpha male get wrapped around a woman's finger, especially when they don't see it while it's happening and don't care when they realize it happened. The connection between Tarrant and Valeriya is pretty much instant, but both of course fight it a little before they fall into bed with each other. Even after jumping into bed they don't trust each other, but feel very protective of the other. It was entertaining watching them try to hold themselves back and frustrating when their lack of communication caused hurt feelings.

Not a whole bunch happened with moving along the Knights of the Dragon storyline, but I didn't much notice with all the hot romance going on. I'm ready to meet another brother and watch him fall in love with his perfect match. I also want to see the Knights go down, so bring on book three!