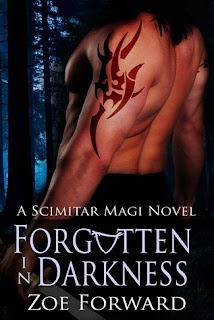 After an unjustified two-century stint in purgatory, Scimitar Magus Dakar returns to the human realm, renewing his eons-old curse. Either he or the woman he loves must murder the other within days of meeting in each new lifetime. To break the vicious cycle, he must kill her before she strikes her deathblow, something he's never done in the past.

Archaeology grad student Shay McGinnis suffers a near-death attack in pursuit of a piece of Scimitar Magi lore. But did the magnificent warrior who pinned her to the wall injure her or the daemon he fought? In her search for answers, she draws the attention of both an ancient evil sorcerer and the warrior Dakar. The attraction between her and Dakar is instant, and for Shay confusing. She wants to be with him, but intuition equates him with death. Not random death. Hers.

Will this be the lifetime they break the curse before they are murdered by an age-old enemy or worse kill each other yet again?

Many past lives have been spent under a curse that leaves the main characters of FORGOTTEN IN DARKNESS without the one that they love the most. During this life Shay doesn't remember who she is or who Dakar is to her. She does know that she is drawn to him but also fears him at the same time. Dakar has spent the last two centuries in purgatory keeping the one who cursed him and his love trapped. Now they are both free and he needs to keep Shay safe while also trying to break the curse that will leave him dead, again.

I enjoyed both Dakar and Shay. Dakar was dark and mysterious. He came of as brutish but once you got to know him you can't help but see him like Shay saw him all those lifetimes ago. Shay stands up for herself pretty well. She charges head first into danger but also seems vulnerable at times. The chemistry between the two was always pretty good but they both fight against their feelings for each other until the end. There were plenty of twists thrown into the plot involving Shay's parents, her step brother, etc. The action was non-stop and I enjoyed meeting all the other Magi. They truly are a team and work well together.

I was a little hesitant to read FORGOTTEN IN DARKNESS because I didn't read book 1 in the Scimitar Magi series but the author assured me that it could be read as a stand alone and she was right, I didn't feel lost at any point in the book. You could tell that there was continuation of a story that was already told but the book itself seemed to have its own plot that was well in hand by the end of the book. I'm not really one to read backwards so I probably wont be going back to book 1 but I look forward to book 3!