Review: Underneath by Jes Young 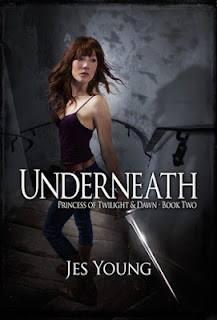 
UNDERNEATH ended up being quite a bit darker than TAB BENNET AND THE INBETWEEN, Tab has come along way in her new role and goes through just as much if not more then she did in book 1. The beginning of UNDERNEATH started out so positive. Tab was happy in her relationship, she had all her family behind her and the ending kinda left her allies and her future up in the air. Because Tab was so set on destroying her father King Daniel she ended up losing more than I felt she gained in the end but I can see where the author might be taking her so I'm hoping my broken heart will heal quickly. We meet a wide array of new characters and creatures and we learn more about the other half of Tab. Alright on to the romance aspects. I wasn't really loving the way Tab was acting with Finnegan throughout the book, but that is probably because I really like Alex. Alex grew on me quickly and I really enjoyed seeing him and Tab together. I was pretty over Robbin in book one so I was not surprised with anything regarding him.

I didn't love the ending, it bummed me out. Cliffhangers will always do that to you though. I'm sad after reading UNDERNEATH but also excited to see what Jes has in store for Tab and the rest of The Princess of Twilight and Dawn cast.

Thank you to everyone who entered!!
Prize: Hardcover Copy of Cold Days