Final Scene
On the afternoon of the third day, Blade knocked on the door to Ruby’s private room.
“Come in.”
She sat in the chaise longue, surrounded by colorful cushions, a book upside down on her lap. She smiled, but it didn’t quite reach her eyes in the way it once had when she looked at him. She didn’t offer him a seat either, or ask what he wanted, with that little lift to her voice that told him he could have anything. Their relationship had changed, and he didn’t know why.
He did know. He simply could not believe that it mattered.
“Marry me,” he blurted out, and felt like a fool. This wasn’t how he had intended to ask her.
She carefully lifted the book, marked the page, and set it aside. Then, she sat up straight and looked at him. “Why?”
A wagon rolled by outside in the street, its wheels clattering noisily over the slickened ruts. Her response was not what he’d expected. Yes and no were straightforward answers. He hadn’t anticipated having to explain himself. He wasn’t certain he could. “I should have asked you a long time ago.”
“Why didn’t you, then?”
“I felt like half a man.” Ruby deserved the truth even though he didn’t like going down this road. “You deserved better.”
She studied him. “Maybe now I think you deserve better.”
A fine-edged knife of pain slid into his chest. “I’m not perfect.”
“Neither one of us is.” She patted the seat beside her. He sat, careful not to crush her skirt, feeling clumsy and awkward on the feminine piece of furniture. Her eyes had gotten suspiciously shiny. “When I first met you, you worked very hard to walk again,” she said.
The pain eased. “We can be married inside of a week.”
She took his hand, linking their fingers, and spoke with a gentle grace. “You aren’t that man anymore. But even then, you never worked hard enough to turn a relationship between us into anything more than friendship. I’m not sure why you should want to, now.”
“Why do women always have to think things to death?” Blade asked.
She laughed. “If we didn’t do the thinking, nobody would.”
“Marry me,” he repeated, more desperately this time, but she was shaking her head.
“I would never have said yes, even if you’d tried harder.” She took a deep breath. “I’m a whore. It hasn’t been a bad life. I have more independence than most women. But if I ever change my mind about marriage, it will be for someone who’s never known me as one.” She held up a hand when he would have interrupted her. “I’ll tell him. I’m not ashamed of it. What’s important is that if the time ever comes, this life will be in my past and it will never have been a part of his.”
“My timing was bad,” Blade said.
Ruby squeezed his fingers. “Terrible. But there was never going to be a good time, so it doesn’t matter.”
He’d known all along she’d say no. That was probably the real reason he’d never asked her before. But he should have, if only to show her that he cared.
But by asking her now, he’d freed them both to move on with their lives. He touched her face with the fingertips of his free hand, then kissed her, somewhat ashamed of the relief he felt. He got to his feet. His heart wasn’t unscathed, but he would survive. He knew she would, too.
“I would have made a good husband,” he said.
She clasped her hands in her lap, looking lovely in the light filtering through the muslin curtains.
“You will,” she assured him. “But not for me.”
He left, closing the door behind him.
__________________________________ 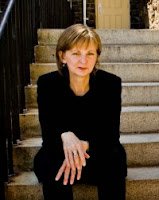 Paula Altenburg lives in rural Nova Scotia, Canada, with her husband and two sons. Once a manager in the aerospace industry, she now enjoys the freedom of working from home and writing full time. She currently writes demon westerns for Entangled Publishing. 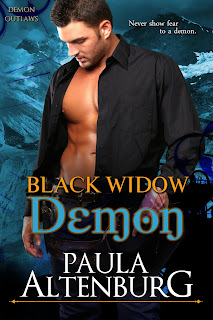 Passionate and headstrong, half-demon Raven is nearly executed on the orders of her fundamentalist stepfather. She escapes from the burning stake using the gifts of her otherworldly heritage and the help of a mortal stranger named Blade. Now she’s set on revenge, and only quiet, intense Blade stands in her way.

A retired assassin weary of the weight of his past, Blade has crossed the desert to seek out a new life. His journey is interrupted when his conscience demands he help Raven find an old friend who can help her. Saving her from her need for revenge and delivering her into the hands of loved ones means he’s one step closer to redemption.

But as Blade’s sense of duty becomes something more and threats, both mortal and immortal, stalk the woman he can’t abandon, he could very well fall back into the life he’s trying so hard to escape.