UFI welcomes Alyssa Rose Ivy Author of Flight. Thanks for Joining us!!

Right now my favorite TV show is The Voice, but with two little kids at home I seem to end up watching Sesame Street or Yo Gabba Gabba more.

I love spending time with my family, reading and enjoying being outside as much as possible.

I love creating characters. It’s so exciting to watch them “come to life.”

I don’t have any set routines per se, but I love to write with coffee and music.

How would you explain Flight to someone who has never heard of it before??

Flight is a Mature YA/New Adult paranormal book that follows Allie as she moves to New Orleans the summer before her first year of college. Planning to stay away from guys, she is unable to resist the sexy yet infuriating Levi and is pulled into his supernatural world.

How did you come up with Crescent Chronicles as the name for the series?

My husband actually thought of it. New Orleans is the Crescent City, and the setting plays a huge part in the books so it really fit.

I loved writing about Allie. She is such a strong and genuine person, and I loved describing her experiences. The hardest character to write about was Jess. It was challenging to make someone a real character when they are somewhat ditsy and boy crazy.

I just released my first New Adult contemporary romance, Derailed. It’s the first book in a series of companion novels called Clayton Falls. The book is about a broken girl who returns to her hometown to rediscover herself. Veer, book two will be out late in 2012. Focus (Crescent Chronicles, #2) will be out in January, and the final book in my YA fantasy Afterglow Trilogy will be out this spring. 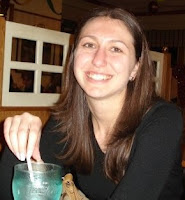 Alyssa Rose Ivy lives in North Carolina with her husband and two young children. Although raised in the New York area, she fell in love with the South after moving to New Orleans for college. After years as a perpetual student, she turned back to her creative side and decided to write. 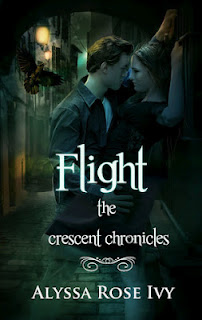 
Sometimes you just have to take flight.

A summer in New Orleans is exactly what Allie needs before starting college. Accepting her dad’s invitation to work at his hotel offers an escape from her ex-boyfriend and the chance to spend the summer with her best friend. Meeting a guy is the last thing on her mind—until she sees Levi.

Unable to resist the infuriating yet alluring Levi, Allie finds herself at the center of a supernatural society and forced to decide between following the path she has always trusted or saving a city that might just save her.

FLIGHT is another self published book I'm glad I read.  Allie sets off with her best friend for New Orleans to work in one of her Dads hotels for the summer before she goes off to college. Little did she know she once she set foot in New Orleans she wouldn't be leaving.

Allie knows what she wants to do with her life, she has plans and she doesn't think twice about following them. Allie has absolutely zero plans to date anyone or look for men while in the city but Levi refuses to leave her alone and she ends up being to intrigued to stay away from him. Jess, Allie's friend didn't last very long in the story, she was definitely only thinking of herself for most of her part in it and I wouldn't be sad if she wasn't in the next story.  Levi drove me nuts. I do LIKE him and his character fits in really well but I cant help but want to punch him in places that will make him stop breathing sometimes. Of course the story wouldn't be good without him in it so I am kinda hoping things change between Allie and Levi in book 2.

New Orleans was a great setting for the story, for some reason I always find the Crescent city beyond fascinating and eat up every scrap of information thrown at me when reading about it. The paranormal parts of the book were great. I never guessed what types of paranormal's were in play until they were revealed and I had never heard of the Pterons before so I liked getting to know them. The plot was fun and flowed at a great pace and I enjoyed the action scenes. There was a great amount of suspense and mystery throughout the entire story.

I really enjoyed FLIGHT and I'm excited to see what comes next. Hopefully I will have a chance to snag a review copy of FOCUS before its released in January of 2013 so I don't have to wait that long. 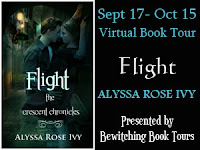