Review: How to Live an Undead Lie by Hailey Edwards (@HaileyEdwards) 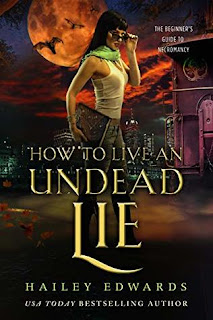 
When a fledgling vampire arrives at Woolworth House searching for his maker, Grier is forced to relive her time in Atramentous. Most of those years are as dark and empty in her memory as she was in her cell. She can't remember her progeny, or the night she resuscitated him, but she can protect him from the Society. As long as she's willing to barter with her grandfather to do it.

But Lacroix has plans of his own. He envisions the city--her city--under his rule, and Grier under his thumb. Now all he needs is the right leverage to force her cooperation, and he has just the person in mind. Grier is ready to trade her freedom until a grim truth is revealed that splits her heart in two. Yet another person she loves has betrayed her, and Grier is left agonizing over how much of their relationship is real and how much was a lie.


I just LOVE this series and can't get enough of it.

UNDEAD LIE was more feel than action. It all affects Grier the most, but she isn't the only one that goes through a lot. I just love Linus and Grier together. I admit, I loved her and Boaz before he showed his true colors, but Linus and Grier are so much more than her and Boaz could have ever been. I also really love Lethe and Hood. They have become more than just the people protecting Grier and I couldn't imagine them not being in the storyline.

I am beyond glad we still have another Beginners Guide book coming our way. I can't wait to see how things turn out.