Stannick’s Pawn Shop isn’t what it seems. To the casual observer, it’s a pawn shop like any other, a space crowded with old guitars, military memorabilia, record albums, and jewelry. It’s been run by generations of Stannicks, barely managing to turn a profit on the boardwalk of Starboard City.

Aside from its ordinary inventory, Stannick’s Pawn Shop keeps a secret inventory of magical things that would shock outside observers. These magical objects are coveted by both the Mob and the supernatural underworld. Raz, a teen boy with the gift of psychometry, sorts the powerful magic away from the duds. There are a few things in the shop that he won’t soon forget:

7. A pair of antique dueling pistols. Through Raz’s psychometric sight, he sees that these identical pistols have drawn blood. One always hits its target, and one always misses. It’s anyone’s guess which is which.

6. A watch that stops time. With the Mob breathing down his neck, Raz’s father gives him a watch that belonged to a fighter pilot. It can stop time for a few seconds – maybe even long enough to dodge a bullet.

5. A ring that grants invisibility to the wearer. Raz’s cousin, Carl, has been given a ring that makes him invisible. You’d think that Carl would be tempted to use this magic on the football field, but he’s more worried about the Mob and denizens of hell invading the pawn shop in the dead of night.

4. The Gargoyles. They appear to be sculptures from an old church, but these stone ankle-biters are the shop’s primary security system. If there’s scuttling under the counters, it’s these cat-sized stone creatures fishing around for loose change.

3. An hourglass that can restore life – or end it. A powerful demon shows up at the night window with an hourglass, agreeing to sell it to restore Raz’s Grandpops’ life after a heart attack. The demon demands blood as payment, far too much blood. The Mob also wants the hourglass, and it will take all the shop’s magical forces to defend it.

2. The Gnome. The Gnome is the most fearsome weapon in the shop. When set in the front window, it appears to be a harmless garden statue. But it was sculpted around the head of a warlock, and it likes chewing livers. The Gnome is not a force to be trifled with.

1. Bert. His full magical name is “Bertasimus,” but he much prefers to go by “Bert.” Bert is a six-foot-tall demon who takes the shape of a T-Rex. He eschews the wearing of pants, and serves as security for the shop. Bert’s got a checkered past, but his loyalty to the Stannicks is eternal. Well, that, and they know his magical name. Bert will fight Hell and the Mob to the bitter end…and only Bert’s knowledge of the secret landscapes of magic will determine who is left standing.
__________________________________ 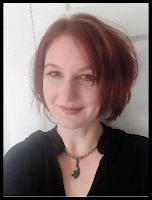 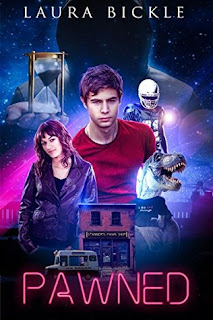 
For fans of Stranger Things and the works of Neil Gaiman, Pawned is a Young Adult novel that blends dark fantasy adventure and noir — on the New Jersey boardwalk.

You can hock almost anything at my family’s pawn shop…even your own soul.

You think running a pawn shop full of cursed objects with your dad and grandpops is cool? Try it for a week and get back to me. Now try picking up any random object and seeing its creeptastic history play out right before your eyes — yup, that’s my little “gift.” It’s my job to sort out what’s haunted and hexed from what’s not, and do my best to keep all of us — including Bert, our ice-cream-truck-driving-lizard demon — employed.

So it wasn’t all sunshine, roses, and possessed samurai swords even before grandpops’ heart attack — but now things are garden-gnome levels of bad. Dad made a deal with the wrong end of the dark side to save grandpops’ life, putting my whole family smack dab between the forces of evil and our friendly local blow-your-pawn-shop-to-smithereens mobsters. And Lily next door…I shouldn’t even be thinking about Lily.

All I ever wanted was to get out of this crap town and away from my messed-up family, and instead it looks like I’m gonna have to use every scrap of magic in this joint or there won’t be any family left to leave behind…